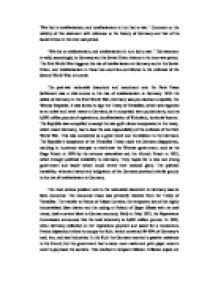 War led to totalitarianism, and totalitarianism in turn led to war. Comment on the validity of this statement with reference to the history of Germany and that of the Soviet Union in the inter-war period.

It was the Russo-Japanese War (1904-05) that they could start a real revolution, as the war revealed the weakness, and corruption of the government. The 1905 Revolution albeit was a failure, it laid a foundation for the future revolutions. However, Nicholas II's blunders, especially joining the First World War, triggered to the February Revolution and October Revolution in 1917. The February Revolution had overthrown the Czardom and set up a provisional government. The government failed because it made a fatal mistake of continuing the participation in the First World War. In the end, the government was overthrown in the October Revolution, and the Communist government was set up, the years followed showed the setting up of a totalitarian party control with strict leadership by Lenin. This paved the road to the rise of totalitarianism in Russia. The adoption of the appeasement policy by Britain and France attributed to the economic percussions and annihilation precipitated by the First World War, failed to check and hastened the rise of totalitarianism in the Soviet Union. After the war, industrial growth slowed down in Europe. There was increasing competition in Europe. Protectionism worsened the position further. Widespread tariffs made the sale of exports more difficult. Another effect of the war on economy was inflation. The war had to be paid for the device most used was borrowing from abroad. ...read more.

Germany further signed a military alliance with Italy, the Pact of Steel in 1939, in which Italy promised full military support if war came. The Soviet Union had also indirectly contributed to the outbreak of the Second World War by encouraging the aggression of Germany. In August 1939, a ten-year non-aggression pact had been concluded between the Soviets and the Nazis. A secret agreement concerning their spheres of influence was also concluded. The pact pledged the contracting parties to refrain from acts of aggression against on another for a period of ten years. In fact, the pact also showed the expansionist side of Stalin's foreign policy. 'Stalin gave the green light to aggression in 1939,' asserted Snell. These alliances had created a tension and war-like atmosphere throughout the whole Europe, even spread to Asia, which stimulated other countries' rearmaments and preparation for a war as they distrusted each other. Countries were expecting for a war soon. Inevitably, the Second World War broke out in this dense atmosphere when Germany invaded Poland in 1939. In conclusion, the history of Germany and the Soviet Union in the inter-war period had proved the validity of 'War led to totalitarianism, and totalitarianism in turn led to war.' It was a cycle that war prompted nationalist discontent, economic straits, and encouraged the appeasement of other European countries which led to the rise of totalitarianism, and the aggressive expansionist foreign policy of totalitarianism in turn ruined world peace and eventually led to war. ...read more.