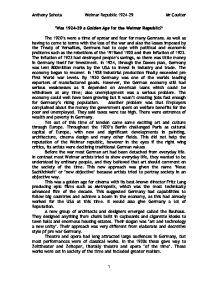 'Was 1924-29 a Golden Age for the Weimar Republic?' The 1920's were a time of uproar and fear for many Germans. As well as having to come to terms with the loss of the war and also the losses imposed by the Treaty of Versailles, Germans had to cope with political and economic problems such as the rebellions of the 1919and 1920 and then inflation of 1923. The inflation of 1923 had destroyed people's savings, so there was little money in Germany itself for investment. In 1924, through the Dawes plan, Germany was lent 800million marks by the USA to invest in industry and trade. The economy began to recover. In 1928 industrial production finally exceeded pre First World war levels. By 1930 Germany was one of the worlds leading exporters of manufactured goods. However, the German economy still had serious weaknesses as it depended on American loans which could be withdrawn at any time; also unemployment was a serious problem. ...read more.

This new approach was given the name 'Neue Sachlichkeit' or 'new objective' because artists tried to portray society in an objective way. This was a golden age for cinema with its best-known director Fritz Lang producing epic films such as Metropolis, which was the most technically advanced film of the decade. This suggested Germany had capabilities to follow big countries and achieve a boom in the economy, as this had already worked for the USA at this time. It would also give Germany a lot of Reputation. A new group of architects and designers emerged called the Bauhaus. They designed anything from chairs built in cupboards and cigarette kiosks to town halls and enormous housing estates. Their slogan was 'art and technology a new unity'. Their approach was very different from elaborate and decretive style pf pre war Germany. Theatre and opera had long attracted large audiences in Germany, but most performances were of classical works. ...read more.

Using my own knowledge I know that the Weimar Republic had believed in Individualism similarly to the Americans at this time to generate a better Germany, however Nazis were against the idea of Individualism and believed they had to get rid of it, the Nazis were a very dominant force and had gained vast support following the ideas that individualism was wrong. This is how many of these artists were forced to flee among the hatred they faced. Therefore during the Weimar 1924-29 period it wasn't as it all seemed. It wasn't necessary a golden age as the vibrant culture didn't gain much support. Although Berlin had established itself as the cultural capital it did not have the full support of its own people which led to the collapse of this. It wasn't as strong. So what the Weimar saw as an exciting and creative place, the public and foreigners saw as rotten and corrupt. ?? ?? ?? ?? Anthony Sohota Weimar Republic 1924-29 Mr Coulter 1 ...read more.