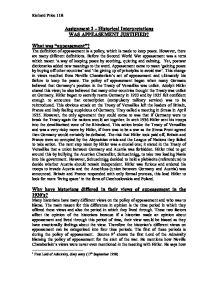 Was appeasement Justified? What was &quot;appeasement&quot;?

Assignment 2 - Historical Interpretations WAS APPEASEMENT JUSTIFIED? What was "appeasement"? The definition of appeasement is a policy, which is made to keep peace. However, there are many different definitions. Before the Second World War appeasement was a term which meant 'a way of keeping peace by soothing, quieting and calming. Yet, postwar dictionaries added new meanings to the word. Appeasement came to mean 'gaining peace by buying off other countries' and 'the giving up of principles to avoid war'. This change in views resulted from Neville Chamberlain's act of appeasement and ultimately his failure to keep the peace. The policy of appeasement began when many Germans believed that Germany's position in the Treaty of Versailles was unfair. Adolph Hitler shared this view; he also believed that many other countries thought the Treaty was unfair on Germany. Hitler began to secretly rearm Germany in 1933 and by 1935 felt confident enough to announce that conscription (compulsory military service) was to be reintroduced. This obvious attack on the Treaty of Versailles left the leaders of Britain, France and Italy feeling suspicious of Germany. ...read more.

Therefore the historian's different views on appeasement can be categorized into four time periods. The first of these periods is during the policy of appeasement. Source F1 shows the first Lord of the Admiralty blaming the policy of appeasement for the start of the war. He mentions how Neville Chamberlain's views were never even mentioned in the meeting with Hitler. He says how Hitler did not seem to yield on any point that he put forward. Source H2 is Lord Halifax's view of appeasement. Unlike the Lord of the Admiralty, Halifax defends Neville Chamberlain and says that he done the best that he could and he believed that Chamberlain had done all he possibly could to spare Europe the ordeal of war. However, he still blames Chamberlain for raising the hopes of the public by using phrases such as 'peace for our time'. The second time period is the post war period; this is where Neville Chamberlain was directly blamed for the outbreak of the war. However, this theory assumes that Britain still had the power to take on Hitler. ...read more.

Source O5 tells us how the British Ambassador to Germany, Sir Neville Henderson, was so sympathetic to Hitler and that he was commonly known as 'our Nazi Ambassador on Berlin'. This view shows that during this period the historians had more hindsight and also acted more rationally, their view on appeasement therefore was more revised and not emotionally fuelled. More recent sources seem to hold Neville Chamberlain less responsible. Sources A6 and B7 both defend Chamberlain. Source A argues that Neville Chamberlain was not a pacifist; he argues that no one linked the rearmament of Germany with Hitler's ambitions. He also states that Chamberlain believed that the British rearmament would make a point to all dictators that the alternative to negotiation was unthinkable. Source B tells us how popular the Munich agreement was to the British public> 1 First Lord of Admiralty, diary entry (17th September 1938) 2 Lord Halifax, in his memoirs Fullness of days, (September 1938) 3 Winston Churchill, speech in the house of commons, (22nd February, 1938) 4 A.J.P. Taylor, Origins of the Second World War, (1961 5 W.R.Rock, British appeasement in the 1930's, (1977) 6 A.J.Beattie, An argument for Chamberlain not being a pacifist. 7 Advice for Conscientious Objectors: document found on the Internet. Richard Price 11B ...read more.