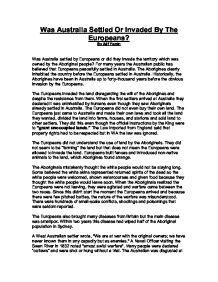 Was Australia Settled Or Invaded By The Europeans?

Since this didn't start the moment the Europeans arrived and because there were few pitched battles, the nature of the warfare was misunderstood. There were hundreds of small-scale conflicts, shootings and poisonings that were seldom reported. The Europeans also brought many diseases from Britain but the main disease was smallpox. Within two years this disease had wiped half of the Aboriginal population in Sydney. A West Australian settler wrote, "We are at war with the original owners; we have never known them in any capacity but as enemies." A Naval Officer visiting the Swan River in 1832 noted "amost awful warfare". Many people were declared "outlaws" and were shot or hung without a trial. The Australian was disgusted at the way they were treating Aboriginals when the Aboriginals tried to be nice to the settlers but were treated badly and punished harshly. ...read more.