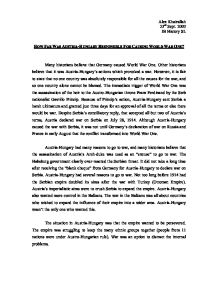 Was Austria-Hungary Responsible For Causing World War One?

Alex Khairallah 23rd Sept. 2003 IB History SL HOW FAR WAS AUSTRIA-HUNGARY RESPONSIBLE FOR CAUSING WORLD WAR ONE? Many historians believe that Germany caused World War One. Other historians believe that it was Austria-Hungary's actions which provoked a war. However, it is fair to state that no one country was absolutely responsible for all the causes for the war, and so one country alone cannot be blamed. The immediate trigger of World War One was the assassination of the heir to the Austro-Hungarian throne Franz Ferdinand by the Serb nationalist Gavrilo Princip. Because of Princip's action, Austria-Hungary sent Serbia a harsh ultimatum and granted just three days for an approval of all the terms or else there would be war. Despite Serbia's conciliatory reply, that accepted all but two of Austria's terms, Austria declared war on Serbia on July 28, 1914. ...read more.

The situation in Austria-Hungary was that the empire wanted to be persevered. The empire was struggling to keep the many ethnic groups together (people from 11 nations were under Austro-Hungarian rule). War was an option to distract the internal problems. It took many years of tension for the First World War to come about. Many events and alliances by countries caused tension between powers. In 1908, Austria-Hungary annexed Bosnia and Herzegovina. This was an example of Austro-Hungarian expansion policy towards the Balkans. The Bosnian crises did not cause a war, but it increased tension between the Habsburg Empire and the nationalistic Serbian government. The Bosnian crises of 1908 was described as a "dress rehearsal for the first world war,"1 which showed the people at the time that war was rapidly becoming inevitable. Four years later, in 1912, war broke out in the Balkans. ...read more.

The small conflict with Serbia turned into the First World War, which dragged in 32 countries causing over 37 million deaths in 4 years and 3 months2. I believe that Austria-Hungary alone could not be the only European power to cause a world war. I agree that Austria caused a lot of tension. Events such as the Moroccan crises and the Naval race had nothing to do Austria, and were also causes to the way the alliances were formed for World War One. To a certain extent I agree that Austria was responsible for causing the war due to the tensions it raised with other countries. However I definitely agree that the outbreak was Austria's fault. On the other hand, tension level in Europe in 1914 was high and escalating. The trigger for the outbreak could have been by any power, it just happened to be from Austria-Hungary. When Gavrilo Princip pulled the trigger to ill Franz Ferdinand, he also pulled the trigger to World War One. ...read more.