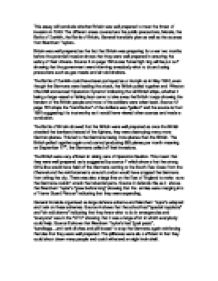 Was Britain well prepared for WW2?

This essay will conclude whether Britain was well prepared to meet the threat of invasion in 1940. The different areas covered are the public precautions, Morale, the Battle of Dunkirk, the Battle of Britain, General Ironside's plan as well as the sources from Merchant Taylors. Britain was well prepared as the fact that Britain was preparing for a war two months before the potential invasion shows that they were well prepared in ensuring the safety of their citizens. Source 2 on page 152 states "street lighting will be put out" showing that the government were informing everybody what to do and using precautions such as gas masks and air raid shelters. The Battle of Dunkirk could have been portrayed as a triumph as in May 1940, even though the Germans were leading the attack, the British pulled together and Winston Churchill announced 'Operation Dynamo' indicating that all British ships, whether it being a large vessel or fishing boat came to take away the British troops showing the heroism of the British people and most of the soldiers were taken back. ...read more.

Source B shows that Merchant Taylor's had "goal posts", "sandbags...anti-tank ditches and pill-boxes" to stop the Germans again reinforcing the idea that they were well prepared. The pillboxes were also efficient in that they could shoot down many people and could withstand an eight inch shell. However, Britain was also not prepared for the war. In terms of the civilian precautions, many gas masks were actually making people sicker and the evacuation went wrong in that people were sent to the wrong places. Although Britain had a Dad's Army, it was actually said to be ineffective showing that they did not prepare their volunteers enough. The Battle of Dunkirk was also a disaster as they were very lucky not to all be killed and they also lost most of their weapons as shown by source 11 indicating that people were "deserted" and very "dispirited". The Battle of Britain gave a clear indication Britain were not well prepared. ...read more.

Overall, I believe that Britain was not well prepared for the invasion. The Battle of Dunkirk was an early sign to show how unprepared they were as they were slow and also lost most of their equipment there. The Battle of Britain showed how the pilots and planes were not up to standard compared to the Germans. The victory seemed to be down to a lot of luck from a single bad call from the German general. The Merchant Taylor's Sources also suggest that they were inexperienced and could not have stood up to a German Army. However, there are also some signs which would have shown they were ready for invasion such as the fact that the Germans could not have destroyed the Royal Navy or Air Force and so the British were prepared already as the Germans couldn't have defeated the British. The fact that the British won shows that they were prepared and the sources give suggestions that many precautions were taken to make them well prepared. ...read more.