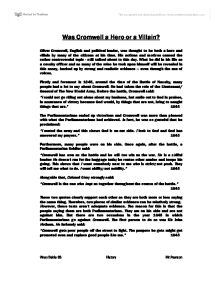 Was Cromwell a Hero or a Villain?

Was Cromwell a Hero or a Villain? Oliver Cromwell, English and political leader, was thought to be both a hero and villain by many of the citizens at his time. His actions and motives caused the rather controversial topic - still talked about to this day. What he did in his life as a cavalry officer and as many of the roles he took upon himself will be revealed in this essay, backed up by strong and realistic evidence - even through the use of voices. Firstly and foremost in 1645, around the time of the Battle of Naseby, many people had a lot to say about Cromwell. He had taken the role of the Lieutenant/ General of The New Model Army. Before the battle, Cromwell said: "I could not go riding out alone about my business, but smile out to God in praises, in assurance of victory because God would, by things that are not, bring to naught things that are." 1645 The Parliamentarians ended up victorious and Cromwell was more than pleased with what the Parliamentarians had achieved. In fact, he was so grateful that he proclaimed: "I routed the army and this shows God is on our side. I look to God and God has answered my prayers." 1645 Furthermore, many people were on his side. Once again, after the battle, a Parliamentarian Soldier said: "Cromwell has won us the battle and he will too win us the war. He is a skilful leader: He doesn't run for the baggage train; he routes other armies and keeps his going. This shows that I want somebody next to me who is strict; not posh. They will tell me what to do. I want ability; not nobility." 1645 Alongside that, Colonel Okey strongly said: "Cromwell is the one who kept us together throughout the course of the battle." 1645 These two quotes clearly support each other as they are both more or less saying the same thing. ...read more.

Therefore, it is fair to say that they are not reliable sources; for they are sticking to the same side again and again regardless of whether Cromwell's actions are good or bad. And ultimately, their comments are useful, but not as useful as others. Two years later, Cromwell put England under military rules. He split England into eleven parts and banned festivals, Christmas and forced them to stop drinking. Another factor of controversy!!! People were upset about the fact that he had taken away their social life. How can he do that?! He doesn't have the rights?! They were the questions asked at the time. Despite this was the case, a few agreed with Cromwell's idea. After all, he was doing it for the welfare of the English. After another two year gap, Cromwell was offered the crown. The whole country was devastated by the offer. Cromwell - king? For the majority of the country, it wasn't on. Even the Parliamentarian Soldier went against Cromwell on this occasion: "I don't want Cromwell to be king. I don't want him to be killed like Charles; for I think he may turn out like Charles. I've followed him everywhere and definitely don't want him to be king." 1657 It seemed that the soldier was rather angry at this because he is supporting Cromwell in the war, but going against him on this occasion. The situation must have been severe enough to make Cromwell's soldier to go against him. Supporting that argument, without a doubt, was also the Royalist Lady. She powerfully said: "Cromwell has a pisspot under his bed rather than going to the cesspool. He is lazy. Surely, how can he be king?" 1657 Furthermore supporting that argument was a Royalist Soldier. He said: "I, along with the army believe Cromwell will use his position with force." In fact, so many people hated the idea of Cromwell being king; there were very few arguments for him. ...read more.

Thirdly, once again, he didn't kill the Levellers for "No reason." He did it to get right off a petty, little group trying to cause problems and trying to put Cromwell under pressure. It was right to kill them because they were going to spread the word; for they were getting bigger and bigger by the second. Next, when Cromwell entered the sitting and eradicated the Rump Parliament, he did it to stop people being conned. He did it for the welfare of the citizens. They were being conned - he didn't like it. Therefore, he chose to do it. Anyway, they were considered a bad Parliament anyway and that is obvious just by looking at the Parliament. That simply is enough evidence to kick them out. Also, the prevention of Ireland's protests was dealt with by Cromwell. Okay, he took the lives of 3,000, but he did it because they didn't surrender. The Irish Lady, along with many others, should have blamed their leader; not Cromwell. Furthermore, the fact that he was used in his bedtime stories proves nothing. He was thought as a villain by a lot of people - that's all. Many people dislike other people. Why wasn't Henry 8th used instead as a bedtime monster - after all he beheaded his six wives, was a cruel man and also fitted the description; for he was a fat and ugly man. Cromwell did nothing compared to Henry - so why him? Rumours!!! Some evil propaganda was passed on by other historians. However, there was one thing in particular that disappointed me and that was when he put the country under military rules. Banning social life is rather cruel but I think his I intentions were not so much. I think he did it for the welfare of the country. Nevertheless, Cromwell was a Hero because of the way in which he ruled. He wasn't soft; he was strict and many people at the time couldn't cope with it. Therefore, Cromwell is a Hero and will always be one in my eyes. ?? ?? ?? ?? Vinay Babla 8S History Mr.Pearson ...read more.