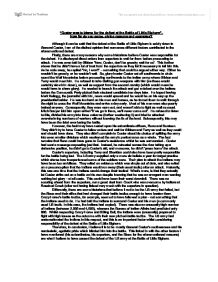 "Custer was to blame for the defeat at the Battle of Little Bighorn". How far do you agree, giving reasons and examples? Although it can be said that the defeat at the Battle of Little Bighorn is solely down to General Custer, I am of the distinct opinion that numerous different factors contributed to the aforementioned defeat. Firstly, there are many reasons why some historians believe Custer was responsible for the defeat. He disobeyed direct orders from superiors to wait for them before proceeding to attack. He was even told by Gibbon "Now, Custer, don't be greedy; wait for us". This further shows that he didn't have a lot of trust from the superiors as they felt it necessary to tell him this. As he rode away, he replied "No, I won't" - something that could be argued either way. Either he wouldn't be greedy, or he wouldn't wait. So, glory hunter Custer set off southwards to circle round the Wolf Mountains before proceeding northwards to the Indian camp where Gibbon and Terry would meet him. ...read more.

and tried to attacked overwhelming numbers of warriors without knowing the lie of the land. Subsequently, this may have been the fatal error losing the battle. However, the fault may have rested upon his subordinate officers, Reno and Benteen. They didn't try to force Custer to follow orders and wait for Gibbon and Terry as well as they could and should have done. They also didn't complain to Custer about his choice of splitting the army into even smaller divisions which weakened the army's performance as a whole. The fact remains that Reno could have gone to Custer's assistance whilst he was surrounded - Custer had sent a message requesting just that. Instead, he retreated across the river taking up a defensive position, he didn't go to Custer's aid, and moreover, he didn't 'press home' the attack. Custer's superiors, including Terry and Sheridan could also have been partly responsible for the battle being lost. ...read more.

Crazy Horse's battle tactics, for example, seemed to have followed a plan - not something that the Indians used to do. He had told the Indians to surround Custer and his men (a commonly used US tactic. In this case, the Indians had copied). There was also an unusually high number of Indians (between 2,000 and 4,000), whereas the Bureau of Indian Affairs had predicted only 800. Whilst respecting Crazy Horse and Sitting Bull, the Indians were (unusually) prepared to fight with high losses as the outcome with their new pitched-battle tactics. The US army had underestimated the Indians in this respect, and this is an important factor whilst considering responsibility of the defeat at the Battle of Little Bighorn. Therefore, in conclusion, I believe it is to be mostly General Custer's recklessness and his narcissistic, egotistic pride which blinded him into the battle. This linked in with the other factors I have mentioned (his subordinates, his superiors, and the Sioux for the aforementioned reasons) are what I believe to have caused the defeat of the US army at the Battle of Little Bighorn. ?? ?? ?? ?? ...read more.