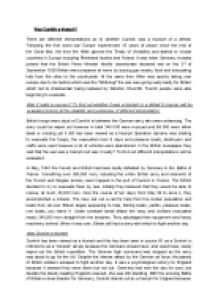 Was Dunkirk a Triumph?

﻿Was Dunkirk a triumph? There are different interpretations as to whether Dunkirk was a triumph of a defeat. Following the first world war Europe experienced 15 years of peace since the end of the Great War, the time the Hitler ignored the Treaty of Versailles and started to invade countries in Europe including Rhineland Austria and Poland. It was when Germany invaded poland that the British Prime Minister Neville chamberlain declared war on the 3rd of September 1939 Britain were prepared at home by issuing gas masks, food and evacuating kids from the cities to the countryside. At the same time Hitler was quickly taking over europe due to his tactics which was the ?blitzkrieg? the war was going really badly for Britain which led to chamberlain being replaced by Winston Churchill. French people were also beginning to evacuate. Was it really a success? To find out whether it was a triumph or a defeat 8 sources will be evaluated looking at the reliability and usefulness of different interpretation. British troops were stuck at Dunkirk in between the German army who were advancing. The army could be wiped out however in total 340 000 were rescued and 68 000 were either dead or missing yet it still has been viewed as a triumph.Operation dynamo was starting to evacuate the troops, the evacuation took 9 days and pleasure boats, destroyers and crafts were used however a lot of vehicles were abandoned. ...read more.

This source was written on the front page of the British newspaper, the daily express, 31st may 1940. Which makes this source not as valid as something that was written in 2003, so in conclusion the source doesn?t have the reliability as something else because it isn?t 100% accurate because some things could be made up for not accurate. The fact that this was written by a British newspaper could mean that it is slightly biased because British people want other citizens to think that they had won the war and make the country look good so they must have just written a few white lies. It is also one sided which makes it biased. The last source that supports Dunkirk was a triumph was source B7, which was written after Winston Churchill was speaking to parliament on June 4th 1940. This source in my opinion isn?t reliable because as soon as i see the date it was written it changes my mind because back then everything wasn?t confirmed and most of the news were lies, and to make it worse it was said by the British prime minister, this is because prime ministers would be upset even if they lost they would have to support their country no matter what so the prime minister said that it was a ?miracle? which was biased because it wasn?t. ...read more.

This means that I have found the second understanding more convincing that Dunkirk was a defeat rather than a victory. This is due to the evidence of the following sources; B9, B13, B10 and B16. Its strengths include more primary sources then the triumphs, which mean less benefit to hindsight to alter opinions. The two most important sources out of the 16 listed, positive and negative is B9, which is the historian GCSE text book, which could reach a balanced judgment and B3. Source B3 it is also a GCSE text book which shows facts and figures and is very limited to opinions, but is entitled to people who are paid to write about history which is somewhat reliable. The weakest sources from both positive and negative listed is B16, a source which is very biased, based on a traitor who wanted to undermine the British?s confidence making it less reliable. The other weakest source is B5, a newspaper article which has been censored by the government and is only allowed to publish positive information, making it also biased like source B16 and less reliable. However, my conclusion is balanced because I have analysed all 16 sources. Eight negative and eight positive. I cross-referenced the sources, compared which is more reliable, primary or secondary sources? I reached a balanced judgement after outweighing the positive with the negatives, the reliable from the unreliable. The Battle of Dunkirk was a defeat. ...read more.