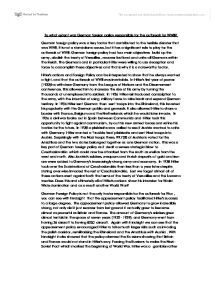 Was german foreign policy responsible for the outbreak of wwII?

To what extent was German foreign policy responsible for the outbreak for WWII? German foreign policy was a key factor that contributed to the terrible disaster that was WWII. It is not a standalone cause, but it has a significant role to play for the outbreak of WWII. German foreign policy had four main objectives build up the army, abolish the treaty of Versailles , recover lost land and unite all Germans within the Reich. The Germans and in particular Hitler were willing to use deception and force to accomplish these objectives and that is why it is a noteworthy factor. Hitler's actions and Foreign Policy can be interpreted to show that he always wanted a fight, and that the outbreak of WWII was inevitable. In Hitler's first year of power (1933)he withdrew Germany from the League of Nations and the Disarmament conference. This allowed him to increase the size of his army by turning the thousands of unemployed into soldiers. In 1936 Hitler reintroduced conscription to the army, with the intention of using military force to take back and expand German territory. ...read more.

The amount of Germany's soldiers grew almost tenfold in the space of seven years (1932- 1939), and Germany went from having 36 aircraft to having 8250 aircraft. Again with hindsight we can see that the appeasement policy encouraged Hitler to take much larger risks such as invading the polish corridor, remilitarising the Rhineland and the Anschluss with Austria. With hindsight it also showed that the policy alarmed the Russians showing that Britain and France would not stand in Hitler's way. Forcing the Russians to make the Nazi-Soviet Pact which marked the beginning of World War. Hitler was a gambler rather than a planner and when Britain didn't stand up to his actions, he became bolder and risked more. Although would Britain have been able to stop Germany re-arming even if they hadn't followed the appeasement policy? Nevertheless, we must remember that Britain was forced into following the appeasement policy by the Failure of the League of nations. The league was an utter failure, it was seen by all countries as weak and ineffective. Due to the lack of an army, almost no organisation and no help from the USA it proved incapable of preventing aggression by the main powers in the 1930's. ...read more.

The Great Depression wasn't the only thing to influenced German Foreign Policy and Hitler's objectives. The Treaty of Versailles fuelled the hatred for the Allies after their failure during the Great War. Hitler and the German public believed the T of V was gravely unjust, and he promised to his people he would reverse it. Hitler and the German Public thought the Treaty of Versailles was too severe, it made the Germans feel weak and resentful. This lead to anger and contributed to the objectives in German Foreign Policy i.e. re-arming, reintroducing conscription, invading Czechoslovakia and Poland. The Treaty of Versailles was the cause of Hitler's hatred towards the Allies and eventually the outbreak of World War II. If the Treaty of Versailles had been fair would it have saved the 70 million people killed during World War II? In balance therefore we can clearly see German Foreign policy was not completely responsible for the outbreak of WWII. Nevertheless it played a key role alongside the appeasement policy, failure of the league of nations, the Great Depression and the Treaty of Versailles in triggering WWII. The factor that is responsible for the most extent for the Outbreak of WWII has to be the appeasement policy as is facilitated Hitler's success to a very large degree. ...read more.