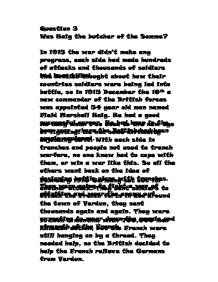 Was Haig the butcher of the Somme?

Question 3 Was Haig the butcher of the Somme? In 1915 the war didn't make any progress, each side had made hundreds of attacks and thousands of soldiers had been killed. The British thought about how their countries soldiers were being led into battle, so in 1915 December the 10th a new commander of the British forces was appointed 54 year old man named Field Marshall Haig. He had a good successful career. He had been in the boar war, where the British had been poorly equipped. As Haig wasn't so used to the new age of fighting. He had some difficulty adjusting to it. With each side in trenches and people not used to trench warfare, no one knew had to cope with them, or win a war like this. So all the others went back on the idea of designing battle plans with trenches. They were going to fight a war of attrition and wear the enemy out. February 1916 Germany set out for another attack. They sent soldiers to attack the French forts in and around the town of Verdun, they sent thousands again and again. ...read more.

From what source 3 shows it makes out that Haig showed so much ignorance for the mistakes and the unexpected loss of soldiers that were made on the first day of battle. If there were at least 60,000 British dead and many German prisoners were taken and 1 Canadian battalion lost, 700 out of 850 men, then where is the progress in that, as stated in source 3, Haig attacked, the first day on the 1st of July 1916, ''Very successful attack this morning... All went like clockwork...The battle is going very well for us already, the Germans are surrendering freely. The enemy is so short of men that I am collecting them from all parts of the line. Our troops are in wonderful spirits and full of confidence.'' This shows the ignorance of Haig in the fact of death, losing and the suffering of the soldiers. How can you rely on Haig's suggestions and views on the war, when he wasn't even on the front line. The more reliable sources, are the sources that come from the soldiers. Which are like the sources, 5+6, The letter in source 7 describes how a captain's friend had to write a letter to the captain's sister, which described his death, which he states to be a quick and painless death. ...read more.

Livesey's book is about the war and this may look like Livesey is only viewing Haig for his topics and of how he felt about what he did. Each book dates, 1989 and the other 1991, these years are very close so they may have used the same books. Neither of them would have fought in the war. These sources give an impression that the books were meant for adult reading so the audience would have been the same. Like from Livesey's source, ''Perhaps his greatest failing was his constant often-misplaced optimism...'' And Warner's source is similar in language. The thoughts and views of Haigs titled depends on the opinions of who's reading. Depending if the person is rich or poor. The only information we get is from Liveseys book, which is about battles, death, blood and murder of the troops. Warner's book is about his family's sympathy. Together they are both balanced views. The fact is that there is no answer to ''Was Haig the butcher of the Somme'' because it depends on who is reading it, what your own personal issues are, experiences. People's opinions on what the people in command should have done. ...read more.