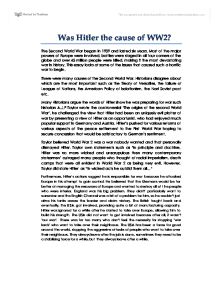 Was Hitler the cause of WW2? A.J.P Taylor wrote the controversial The origins of the second World War, he challenged the view that Hitler had been an uniquely evil plotter of war by presenting a view of Hitler as an opportunist, who had enjoyed muc

Was Hitler the cause of WW2? The Second World War began in 1939 and lasted six years. Most of the major powers of Europe were involved, battles were staged in all four corners of the globe and over 45 million people were killed, making it the most devastating war in history. This essay looks at some of the issues that caused such a horrific war to begin. There were many causes of the Second World War. Historians disagree about which are the most important such as the Treaty of Versailles, the failure of League of Nations, the American Policy of Isolationism, the Nazi Soviet pact etc. Many Historians argue the words of Hitler show he was preparing for war such historian A.J.P Taylor wrote the controversial 'The origins of the second World War', he challenged the view that Hitler had been an uniquely evil plotter of war by presenting a view of Hitler as an opportunist, who had enjoyed much popular support in Germany and Austria. Hitler's pushed for various reforms of various aspects of the peace settlement to the First World War hoping to secure concession that would be satisfactory to German's sentiment. Taylor believed World War 2 was a war nobody wanted and that personally dismayed Hitler. Taylor own statements such as 'in principle and doctrine, Hitler was no more wicked and unscrupulous then many contemporary statesmen' outraged many people who thought of racial imperialism, death camps that were all evident in World War 2 as being very evil. ...read more.

Had Britain and France resisted German aggression World War II might not have broken out. Another important factor leading to WW2 was the failure of the League of Nations. This organisation had been set up to try and prevent future wars by creating a international group that would be responsible for keeping peace in the world and solving arguments between countries. The league of Nation began on November 15, 1920 in Geneva. There were 42 countries at the meeting and ended April 8, 1946. It lasted for 26 years and 63 nations were members. President Wilson quoted 'It is not enough just to win the war. We must win it in such a way as to keep the future peace of war.' The League of Nations had several goals: It would be to stop wars happening; help to improve people's lives and try to persuade countries to give up their weapons. It failed because there was a lack of unity between Britain and France. They often disagreed and they did not trust each other. With this and the fact decisions had to be unanimous made it almost impossible for the League to make a decision. The League was also weakened by the Great Depression that hit the world in the years following the Wall Street Crash. At a time of economic crises it meant that the League had trouble imposing sanctions especially at that time. ...read more.

When Germany surrendered, the German people still felt a huge amount of hatred for other countries interfering in the foundation of Germany itself. The level of bad feeling coming from Germany and other countries was so great that they weren't even invited to participate in the peace treaties that were put in place at the end of the war. The Treaty of Versailles that dealt specifically with the future of Germany left no room for discussion on the part of the German people. The result was that Germany was left was full of hatred for those who had wanted to humiliate them as a race - hatred that Hitler would achieve in the 1930s in his rise to power. Hitler stood under the success of revenge against the other countries for Germany's defeat. His desire for power was to make lawful by claims that he wanted to get rid of the government that surrendered in the First World War, and replace it with his own organisation (the National Socialist German Workers' Party, which became known as the Nazi party) so that he could have full control of the European powers that had defeated Germany after 1918. It's fair to conclusion therefore that the First World War was the main cause of the Second World War because it was the first in the chain of events that ultimately led to the declaration of war in 1939. ...read more.