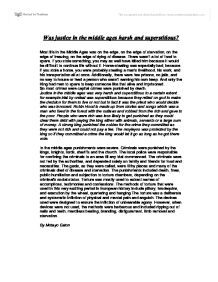 Was justice in the middle ages harsh and superstitious?

Was justice in the middle ages harsh and superstitious? Most life in the Middle Ages was on the edge, on the edge of starvation, on the edge of freezing, on the edge of dying of disease. There wasn't a lot of food to spare. If you stole something, you may as well have killed him because it would be difficult to continue life without it. Horse-stealing was especially bad, because if you stole a horse, you were probably stealing a man's livelihood, his work, and his transportation all at once. Additionally, there were few prisons, no jails, and no way to house or feed a person who wasn't earning his own keep. ...read more.

Robin Hood is made up from stories and songs which was a man who lived in the forest with the outlaws and robbed from the rich and gave to the poor. People who were rich was less likely to get punished as they could clear there debt with paying the king either with animals, servants or a large sum of money. A strong king punished the nobles for the crime they committed as they were not rich and could not pay a fee. The moyleyns was protected by the king so if they committed a crime the king would let it go as long as he got there vote. ...read more.

The punishments included death, fines, public humiliation and subjection to torture chambers, depending on the criminal's social status. Torture was mostly used to extract names of accomplices, testimonies and confessions. The methods of torture that were used in this very exciting period in European history include pillory, brodequins, and execution by the wheel, quartering and hanging The torture was a deliberate and systematic infliction of physical and mental pain and anguish. The devices used were designed to ensure the infliction of unbearable agony. However, when devices were not used, the methods were barbarous and included ripping out of nails and teeth, merciless beating, branding, disfigurement, limb removal and starvation. By Motayo Eaton ...read more.