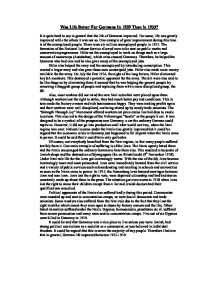 Was Life Better For Germans In 1939 Than in 1933? It is quite hard to say in general that the life of Germans improved. For some, life was greatly improved while for others it was not so. One example of great improvement during this time is of the unemployed people. There were six million unemployed people in 1933. The formation of the National Labour Service allowed men to be sent on public works and conservation programmes. Hitler set the unemployed to work on things such as a large amount of motorways (Autobahns), which criss-crossed Germany. Therefore, he helped the Germans who had cars and he also gave many of the unemployed jobs. Hitler also helped the army and the unemployed by introducing conscription. ...read more.

The "Strength Through Joy" Movement offered workers cut price cruise line holidays to exotic locations. This also led to the design of the Volkswagen "beetle" or the people's car. It was designed to be a symbol of the prosperous new Germany, a car the ordinary German could aspire to. However, it did not go into production until after world war two, when the Nazi regime was over. National income under the Nazis also greatly improved but it could be argued that the economic crisis in Germany just happened to hit its peak when the Nazis came to power. It could be said that it could have only got better. Of course, not everybody benefited from the Nazi regime, in fact many people suffered terribly from it. ...read more.

Political opponents of the Nazis also suffered badly during this period. Communists were rounded up and sent to concentration camps, as were Social democrats and trade unionists. Some workers also suffered from the Nazi rule due to the fact that they lost the right to strike which meant they were open to abuse by factory owners and the like. Other hated minorities suffered under the Nazis. Gypsies, homosexuals, prostitutes etc all suffered from severe persecution and many were sent to concentration camps. Five out of six Gypsies were killed in Germany in 1939. It could be said that Germany was a nice place to live unless you were Jewish, had strong political convictions as a socialist or a communist, or you believed in individual freedom. It could be argued that this is never the majority of any people. Therefore I believe that in general, German life improved between 1933-1939. ...read more.

The student has a clear structure and argument in the essay, however, the major flaw in the essay would be that they failed to completely Ã¢â‚¬Ëœpull apartÃ¢â‚¬â„¢ the essay question. By this, I mean fully interpret the essay question. There is no definition of what Ã¢â‚¬Å“GermanÃ¢â‚¬Â is which is key to answering this question. Whilst it is apparent after reading the essay that Ã¢â‚¬Å“GermanÃ¢â‚¬Â is only the NaziÃ¢â‚¬â„¢s view which excludes Jews and Gypsies (to name a few), it is not clear in the essay. However, this was a well-argued essay with strong evidence to support the argument. To improve, the student should have made more comparisons between what life was like in 1933 and 1939. This was done perfectly in the paragraph about the Jews but was less evident in the other paragraphs. Even though there is scope for improving the conclusion, it is sufficient for GCSE level. A conclusion still needs evidence to back up the studentÃ¢â‚¬â„¢s final judgement rather than just assertions of factors.

The student has included many points in their essay which has served them well. It created a strong and convincing argument. The flaw of not identifying at the beginning of the essay the meaning of Ã¢â‚¬Å“GermanÃ¢â‚¬Â meant that the rest of the essay had to compensate for this. It is important to remember to Ã¢â‚¬Ëœstate the obviousÃ¢â‚¬â„¢ at times, as this makes clear the point of view or line of argument that is taken in the essay. Otherwise, the question was well addressed.
Very strong and relevant examples are used throughout the essay to support the argument. Whilst it could be said that there are too many points in each paragraph and not enough analysis, it is acceptable at GCSE level to do this and marks are not affected. The most important thing is that the evidence used is all relevant.
An appropriate and strong conclusion was made. This was mainly due to clear and well supported paragraphs throughout the essay which naturally flowed to the conclusion.

The spelling and grammar are both fine, however the punctuation (specifically the usage of capital letters for events such as Ã¢â‚¬ËœThe Night of the Long KnivesÃ¢â‚¬â„¢) needs a little attention. Such issues should not be arising at GCSE level Ã¢â‚¬â€œ this would put the studentÃ¢â‚¬â„¢s work into the lower levels of a grade rather than in the higher level of a grade. The appropriate terms were used where necessary (such as names of groups e.g. the SS) and a clear understanding was shown for what the terms meant. Interestingly, the essay doesnÃ¢â‚¬â„¢t seem to have an introduction which I think has done this student a favour. The omission of the introduction means that the essay launches straight into addressing the question which at GCSE level is perfectly acceptable. Only a solid conclusion is absolutely necessary and whilst the conclusion has scope for improvement, the argument naturally brought the conclusion into the essay without it being disjointed.