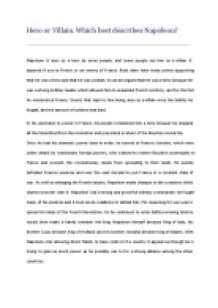 Was Napoleon a Hero or a Villain?

﻿Hero or Villain. Which best describes Napoleon? ________________ Napoleon is seen as a hero by some people, and some people see him as a villain. It depends if you?re French or an enemy of France. Both sides have many points supporting that he was a hero and that he was a villain. It can be argued that he was a hero because he was a strong military leader which allowed him to expanded French territory, and for the fact he modernized France. Events that lead to him being seen as a villain were the battles he fought, and the amount of soldiers that died. In his ascension to power in France, his people considered him a hero because he stopped all the bloodshed from the revolution and prevented a return of the Bourbon monarchy. ...read more.

Napoleon was a strong and powerful military commander, he fought many of his enemies and it took seven coalitions to defeat him. His reasoning for war was to spread his ideas of the French Revolution. As he continued to enter battles winning land he would then make a family member the king. Napoleon himself because King of Italy, his brother Louis became King of Holland and his brother Josepha became king of Naples. With Napoleon only allowing direct family to have control of a country it appears as though he is trying to gain as much power as he possibly can to for a strong alliance among the other countries. This period of warfare drained France of its young men and despite all the great victories, even the French referred to him as the butcher. ...read more.

If he were active during the time of the later years of the Revolution, he would have gotten beheaded on the guillotine under the extreme-liberal rule of Jacobins. Napoleon also took away the natural freedoms of speech and the press that the Declaration of the Rights of Man had established, through the use of censorship of press. Overall I think Napoleon was hero. the man brought success to France he expanded the government and increased new law codes that incorporated some of the freedoms gained by the people of France during the French revolution. He was a serious and powerful general. He guided all his wars to victory. He had influenced much of the French states with his ideas. Napoleon granted constitutions, introduced law codes, abolished feudalism, and created efficient governments. Napoleon Bonaparte was definitely a hero. ...read more.