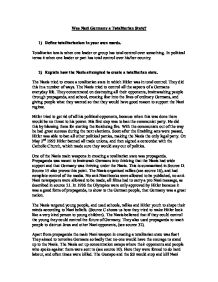 Was Nazi Germany a totalitarian state?

Was Nazi Germany a Totalitarian State? 1) Define totalitarianism in your own words. Totalitarian ism is when one leader or group has total control over something. In political terms it when one leader or part has total control over his/her country. 2) Explain how the Nazis attempted to create a totalitarian state. The Nazis tried to create a totalitarian state in which Hitler was in total control. They did this in a number of ways. The Nazis tried to control all the aspects of a Germans everyday life. They concentrated on destroying all their opponents, brainwashing people through propaganda, and school, creating fear into the lives of ordinary Germans, and giving people what they wanted so that they would have good reason to support the Nazi regime. Hitler tried to get rid of all his political opponents, because when this was done there would be no threat to his power. His first step was to ban the communist party. He did this by blaming them for starting the Reichstag fire. With the communists out of the way he had great success during the next elections. Soon after the Enabling acts were passed, Hitler was able to ban all other political parties, making the Nazis the only legal party. On May 2nd 1993 Hitler banned all trade unions, and then signed a concordat with the Catholic Church, which made sure they would stay out of politics. ...read more.

His protests were so popular that it forced the Nazis to temporarily stop. Protestant ministers such as Pastor Martin Niemoller, and Dietrich Bonhoeffer also criticized the Nazis. Another threat to the Nazis was the July Bomb plot in 1994. Army officials got together and planted a bomb in Hitler's conference room. But it failed miserably, and Hitler survived. There were also some anti Hitler youth movements. The two main ones were the Swing movement, and the Edelweiss Pirates. The Sawing movement was a group of teenagers who went to parties and listened to American music. They accepted Jews at their clubs, and talked about sex. The Edelweiss Pirates were like Hitler youth, but they hated the Nazis. They also attacked and taunted groups of Hitler youths. Around 1944 there was quite a bit of Jewish resistance to the Nazis. Many Jews escaped from Germany. Others lived under cover. Some also fought against the Nazis. There were non-Jews who helped Jews escape from Germany. These people usually kept very low profiles. Apart from these organised movements there was also resistance shown by ordinary Germans. These were doing things like not giving the Hitler salute when asked, passing on anti-Nazi jokes, and hiding Jews and other groups from the government. 4) Using the example of the Holocaust, discuss the dangers of totalitarianism. The Holocaust shows us why totalitarianism can be so dangerous. Hitler was the leader of a totalitarian Germany. He had ideas which were very good, and those that were horrific. ...read more.

Nazi Germany's totalitarianism was largely due to fear. People feared the Nazis. They feared the Concentration Camps, and the Gestapo. Many people told on their friends just because they wanted to show that they were obedient Nazis. Almost everyone hated the Nazis, but the main reason they couldn't do anything about it was fear. The Nazis did many successful things for Germany. They solved the unemployment crisis, by creating new jobs. They helped Germany's economy and built up its army. The Nazis also helped improve working conditions and gave workers rewards for working well. These things however helped Germany's totalitarianism grow. People were happy with the new Germany; they were willing to sacrifice their political rights to see Germany succeed. Although Germany was very totalitarian, there were a few people who opposed the Nazis and also showed some resistance to the Nazis. Among these were various church leaders such as Bishop Galen, and Pastor Martin Niemoller. There was an unsuccessful bomb plot to try and kill Hitler in 1944. This was organised by army officials near the end of the war. There were also some anti Nazi youth movements. These included the Swing movement and the Edelweiss pirates. I think Nazi Germany's totalitarianism is proved by the holocaust. People hated the holocaust. They didn't want the Jews to be killed, (see source 63). But the Holocaust still happened. This shows how totalitarian Nazi Germany was, and how much power Hitler had over his own people. I think Nazi Germany was hugely totalitarian, but not a 100%. 23/3/03 By: Sameer ...read more.