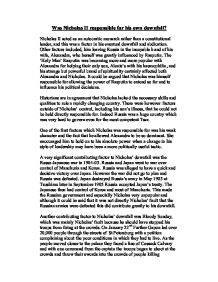 Was Nicholas II responsible for his own downfall?

Was Nicholas II responsible for his own downfall? Nicholas II acted as an autocratic monarch rather than a constitutional leader, and this was a factor in his eventual downfall and abdication. Other factors included, him leaving Russia in the incapable hand of his wife, Alexandra, who herself was greatly influenced by Rasputin. The 'Holy Man' Rasputin was becoming more and more popular with Alexandra for helping their only son, Alexis's with his haemophilia, and his strange but powerful brand of spirituality certainly affected both Alexandra and Nicholas. It could be argued that Nicholas was himself responsible for allowing the power of Rasputin to extend so far and to influence his political decisions. Historians are in agreement that Nicholas lacked the necessary skills and qualities to rule a rapidly changing country. There were however factors outside of Nicholas' control, including his son's illness, that he could not be held directly responsible for. Indeed Russia was a huge country which was very hard to govern even for the most competent Tsar. One of the first factors which Nicholas was responsible for was his weak character and the fact that he allowed Alexandra to be so dominant. She encouraged him to hold on to his absolute power when a change in his style of leadership may have been a more politically useful tactic. A very significant contributing factor to Nicholas' downfall was the Russo-Japanese war in 1904-05. ...read more.

Nicholas regretted signing the October Manifesto and he dismissed Witte, the man who encouraged him to sign it. In Witte's place he appointed a man called Peter Stolypin. Stolypin got to work immediately; he set up a special court for people who were obviously guilty it was called 'field court for civilians'. The people who were being tried could not be found innocent. They were either sentenced to exile or execution. By the end of 1906 over one thousand terrorists or revolutionaries were sentenced to execution and another 20,000 were sentenced to exile. His measures were tough but effective, the number of Russian revolutionaries went down from 100,000 in 1905 to 10,000 in 1910. This settled the revolutionaries and helped Nicholas greatly but still people were annoyed at these harsh measures. Stolypin also tried to reduce revolutionaries by helping the peasants because they made up the majority of the population. He tried to give them better standards of living and encouraged them to buy their own land. The government provided loans for the peasants but still only the wealthier of them could afford loans. Although Stolypin's harsh measures had worked the economy remained weak. Appointing Stolypin helped the Tsar and shows that he was not totally responsible for his own downfall because he helped reduce opposition to his rule, but it could be argued that these brutal methods were in fact only delaying the inevitable Revolution against his government. ...read more.

People were dissatisfied with the government, rising prices, and food shortages. Women were queuing for hours outside the bakery only to be told that there was no bread left. The women stormed the bakeries and by the next day thousands of workers were on strike, crowds gathered and chanted anti-government slogans. The crowds were getting out of hand attacking shops and setting buildings alight. The Tsar ordered the commander of the military forces to put an end to the disorders but the generals troops were new recruits and had sympathy for the people as they too were suffering. Nicholas did not realise the seriousness of the riots until too late and on March 15th Nicholas was forced to abdicate. After looking at all the factors that contributed to Nicholas' downfall, it would appear that Nicholas was to a very great extent responsible for his own downfall. It could not be said that he was totally the cause of his own ruin but certainly his actions contributed greatly to the increased unrest within Russia. The brutal treatment of his political enemies was only effective in the short term, and his lack of successful leadership on the battlefields led to more suffering for his already starving people. Nicholas made many bad decisions such as leaving the country in the control of with his wife and allowing Rasputin's astonishing rise to power. There were other factors which contributed which Nicholas had no control over such as his son's illness, the harsh Russian Winters, the unstable political situation outside of his borders and the very size of his country. ...read more.

This is a thorough and strong response that covers all the key points well. The author regularly links back to the question and offers a convincing conclusion. 5 out of 5 stars.