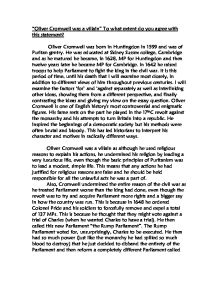 Was Oliver Cromwell a villain?

"Oliver Cromwell was a villain" To what extent do you agree with this statement? Oliver Cromwell was born in Huntingdon in 1599 and was of Puritan gentry. He was educated at Sidney Sussex college, Cambridge and as he matured he became, in 1628, MP for Huntingdon and then twelve years later he became MP for Cambridge. In 1642 he raised troops to help Parliament to fight the king in the civil war. It is this period of time, until his death that I will examine most closely, In addition to different views of him throughout previous centuries. I will examine the factors 'for' and 'against separately as well as interlinking other ideas, showing them from a different perspective, and finally contrasting the ideas and giving my view on the essay question. Oliver Cromwell is one of English history's most controversial and enigmatic figures. His fame rests on the part he played in the 17thC revolt against the monarchy and his attempts to turn Britain into a republic. He inspired the beginnings of a democratic society but his methods were often brutal and bloody. This has led historians to interpret his character and motives in radically different ways. ...read more.

The period when he ruled alongside the army was very unpopular and people had their lands plundered and restrictions placed on entertainment such as the performing of plays because of Cromwell's extremist views about them being hellish places (this was based on that the plague was easily spread in crowded places and the plague came from hell). It was a dictatorship and these restrictions were enforced by violence (people being hung to made examples of them). He even killed his own men in cold blood, while they were sleeping. This is because he is a power-hungry dictator and didn't like the idea of not having ultimate power within the country. When he went to Ireland he massacred women and children with no weapons, which had surrendered. He slaughtered them inside a church and also killed the priests. He then moved on to another Irish settlement, Wexford, who also suffered the pain and murder that Drogheda had endured. No-one was spared. He then used propaganda to justify his horrific actions, saying that they were just as bad as they had killed English settlers and also that they were Catholic and were therefore not worth as much as Puritans "barbarous wretches". ...read more.

other ways as Cromwell's life is wrapped up in speculation which makes it hard to get a clear view of his life as almost every action that he does is viewed in different ways by different sources. He is a victim of propaganda both for and against him. I agree with the statement because when he ruled as Lord Protector the country was in an unstable dictatorship and the idea of abolishing the monarch was undermined as he ruled just like the king, with the ability to disband Parliament. You could compare him to modern day dictators such as Ariel Sharon: fighting for his religion, a military genius which has helped his country during conflict and helped the country and army to run efficiently, but more importantly, running the country in a dictatorship based on fear. This is the main reason to which I agree with the statement but also that he justified most of the atrocities that he committed with religion, claiming that he was a devout Puritan whereas if you examine his life more closely it doesn't appear this way. The clothes he wore for example were often embroidered silk and his funeral cost more than 60,000 pounds. When the main Puritan belief is to lead a life of modesty this seems very extravagant. ...read more.