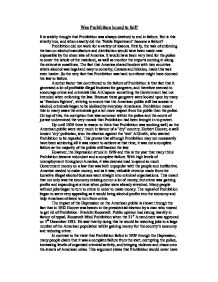 Was prohibition bound to fail?

Was Prohibition bound to fail? It is widely thought that Prohibition was always destined to end in failure. But is this strictly true, and when exactly did the 'Noble Experiment' become a failure? Prohibition did not work for a variety of reasons. Firstly, the task of enforcing the ban on alcohol manufacture and distribution would have been made near impossible by the sheer size of America. It would have been very hard for the police to cover the whole of the mainland, as well as monitor the imports coming in along the extensive coastlines. The fact that America shared borders with two countries where alcohol was legal and easy to come by, Canada and Mexico, made this task even harder. So the very fact that Prohibition was hard to enforce might have doomed the law to failure. Another factor that contributed to the failure of Prohibition is that fact that it generated a lot of profitable illegal business for gangsters, and therefore seemed to encourage crime and criminals like Al Capone- something the Government had not intended when enforcing the law. ...read more.

Many people without jobs began to turn to crime in order to make money. The repeal of Prohibition began to seem very appealing as it would bring alcohol profits into the economy and help American citizens to turn from crime. The impact of the Depression on the American public is shown through the fact that in 1932 Hoover was beaten in the presidential election by a man who vowed to get rid of Prohibition- Franklin Roosevelt. Public opinion had swung heavily in favour of repeal. Roosevelt lifted Prohibition when the 21st Amendment was approved on 5th December 1933. He saw that by doing this he would be restoring jobs to a large number of the American population whilst gaining money for the country's economy and reducing crime. In contrast to the view that Prohibition failed in 1929 through the Depression, many people claim that it was a complete failure from the start, corrupting the police, increasing levels of organised criminal activity, and bringing violence and chaos onto the streets of American cities. ...read more.

In my opinion, the failure of Prohibition was inevitable, mainly due to the fact that it was always going to be impossible to enforce because of the sheer size of America and its coastlines. In my eyes, the Depression was the final blow in the struggle to keep Prohibition working, effectively ending any kind of success the law was having. However, this opinion is formed with hindsight and I can easily see how Prohibition was deemed a good idea at first, as it appeared to provide an answer to almost everyone's problems. But in the end I believe that the factors against the success of Prohibition, such as the problems of corruption, the fact that many rich people were easily able to get hold of alcohol anyway from illegal bars, and that a large amount of people went ahead and manufactured their own alcohol anyway, greatly outweighed the factors for the success of Prohibition. Sources used: DeMarco, N -"The USA: A divided nation" (Longman, 1994) Kelly, N & Lacy, G -"Modern World History" (Heinemann, 2001) http://www.druglibrary.org/schaffer/history/rnp/rnptoc.htm ...read more.