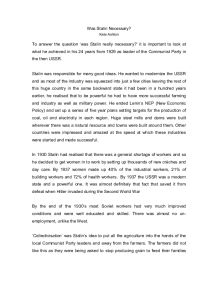 Was Stalin Necessary? Kate Ashton To answer the question 'was Stalin really necessary?' it is important to look at what he achieved in his 24 years from 1929 as leader of the Communist Party in the then USSR. Stalin was responsible for many good ideas. He wanted to modernize the USSR and as most of the industry was squeezed into just a few cities leaving the rest of this huge country in the same backward state it had been in a hundred years earlier, he realised that to be powerful he had to have more successful farming and industry as well as military power. ...read more.

It was almost definitely that fact that saved it from defeat when Hitler invaded during the Second World War By the end of the 1930's most Soviet workers had very much improved conditions and were well educated and skilled. There was almost no un-employment, unlike the West. 'Collectivisation' was Stalin's idea to put all the agriculture into the hands of the local Communist Party leaders and away from the farmers. The farmers did not like this as they were being asked to stop producing grain to feed their families and instead to produce crops for industry. The Kulaks, who owned their own land, refused to even hand it over and a long battle started. ...read more.

He ruled as a dictator and kept the Soviet Union apart from most of the rest of the world, keeping all foreigners out. He created a system of government based entirely on fear felt by every living citizen and his policies created a privileged class that took advantage of all of the rest of the people. Stalin was responsible for millions of deaths during the battles of the collectives; through the forced labour camps, the mistakes he made in the Second World War and just his personal campaign of violence and vengeance. So was Stalin 'necessary'? Could his modernisation/industrial revolution and military success have happened without the use of his violent and brutal Stalinist methods? It is equally as arguable both ways and possibly would have happened without Stalin but maybe not as quickly. ...read more.