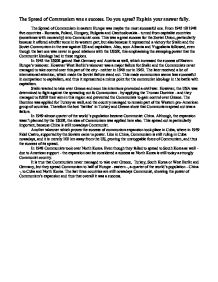 Was teh spread of Communism a success?

The Spread of Communism was a success. Do you agree? Explain your answer fully. The Spread of Communism in eastern Europe was maybe the most successful one. From 1945 till 1948 five countries - Romania, Poland, Hungary, Bulgaria and Czechoslovakia - turned from capitalist countries (sometimes with monarchy) into Communist ones. This was a great success for the Soviet Union, particularly because it offered a buffer zone in its western part, but also because it represented a victory for Stalin and the Soviet Communism in the war against US and capitalism. Also, soon Albania and Yugoslavia followed, even though the last one was never in good relations with the USSR, this emphasising the sweeping power that the Communist Ideology had in these regions. ...read more.

This made communism seems less successful in comparison to capitalism, and thus it represented a minus point for the communist ideology in the battle with capitalism. Stalin wanted to take over Greece and soon his intentions provoked a civil war. However, the USA was determined to fight against the spreading out fo Communism - by applying the Truman Doctrine - and they managed to fulfill their aim in this region and prevented the Communists to gain control over Greece. The Doctrine was applied for Turkey as well, and the country managed to remain part of the Western pro-American group of countries. ...read more.

In 1948 Communists took over North Korea. Even though they failed to spread to South Korea as well - due to American support - the expansion can be considered a success as North Korea is still today a strongly Communist country. It is true that Communists never managed to take over Greece, Turkey, South Korea or West Berlin and Germany, but they spread Communism to half of Europe - eastern -, a quarter of the world's population - China -, to Cuba and North Korea. The last three countries are still nowadays Communist, showing the power of Communism's expansion and thus that overall it was a success. ?? ?? ?? ?? ...read more.