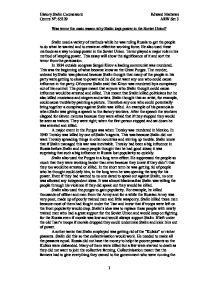 Was terror the main reason why Stalin kept power in the Soviet Union?

Was terror the main reason why Stalin kept power in the Soviet Union? Stalin used a variety of methods while he was ruling Russia to get the people to do what he wanted and to create an effective working force. He also used these methods as a way to keep power in the Soviet Union. Terror played a major role in his method of keeping power. This essay will show the significance of it and sort the terror from the persuasion. In 1934 outside congress Sergei Kirov a leading communist was murdered. This was the beginning of what became know as the Great Purges. The murder, ordered by Stalin was planned because Stalin thought that many of the people in his party were getting to close to power and he did not want any one who could cause influence in the party. Of course Stalin said that Kirov was murdered by a conspiracy out of his control. The purges meant that anyone who Stalin thought could cause influence would be arrested and killed. This meant that Stalin killed politicians but he also killed musicians and singers and artists. Stalin thought that an artist, for example, could cause trouble by painting a picture. Therefore any one who could potentially bring together a conspiracy against Stalin was killed. An example of his paranoia is when Stalin was giving a speech to the factory workers. After the speech the workers clapped for eleven minutes because they were afraid that if they stopped they would be seen as traitors. They were right; when the first person stopped and sat down he was arrested and killed. ...read more.

This means that the quality of the produce would go down. Terror could also hold the country back because thousands of people were being arrested and killed that even though there were still millions of people, the skilled people and the factory managers were being arrested and killed. Therefore there were not so much people working in the factories which on a large scale and in the long term means that the amount of produce would go down and Russia's economic status would fall. Stalin desperately needed to catch up with the rest of Europe. Stalin felt he could only do this using force. Linking back to the idea of Stalin getting rid of all the officers from the army he did not do this just by force but also by propaganda. He created an image of the ideal Communist Worker and fighter, who was heroic and would always fight for Russia. This was Stalin's method of persuasion. Stalin used propaganda everywhere, in the factories, in the Army and in the country where he needed to boost the idea of collectivisation. This inspired many Russian workers, me and women to work harder because Stalin had created the image of a new industrialised Soviet Union. At the start of the First Five Year Plan propaganda was basically what made the workers work. This was because they realised that if they work they would be better off. But this was only put into their minds by the posters not by speeches. Stalin also used other methods of persuasion, such as in the schools. Stalin created a policy that meant the schools had to teach about the new way in which the Soviet Union was to be built and to educate them into Communism. ...read more.

This would not help the country because many people would think that something had to be done about the terror and the purges. Terrorism is the most important reason and the main reason why Stalin was able to keep power because it suppressed the people and so they did not dare to speak out against him. If they did then Stalin would have him killed. It was an efficient tactic for Stalin because it meant that there was no way in which the people, even if they united would throw Stalin out of power, especially since Stalin had the Army in his side. If Stalin had just used persuasion then the people would not have worked hard enough and the idea of the new USSR would not have been created. Someone would have thought that Stalin was not pushing the country hard enough so they would have conspired against Stalin and he would not have been able to do anything about it since he would not have had the support of the Army or the NKVD (secret police). Another reason why Stalin used power is that the Army would not have been effective meaning that when war broke out in 1941. Even though Russia's army was not prepared for the German attack they were more organised than they would be if Stalin had not purged them because many of the old troops may not have fought for Stalin. It was only by applying terror that Russia was able to hold together and push the germans back out of the country. This is why terror was the most important reason why Stalin kept power and because after the Second World War Stalin was still in power. History Stalin Coursework Edward Mathews Centre No: 65129 ARW Set 3 1 ...read more.