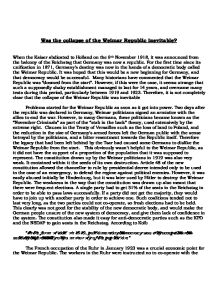 Was the collapse of the Weimar Republic inevitable?

Was the collapse of the Weimar Republic inevitable? When the Kaiser abdicated to Holland on the 9th November 1918, it was announced from the balcony of the Reichstag that Germany was now a republic. For the first time since its unification in 1871, Germany's destiny was now in the hands of a democratic body called the Weimar Republic. It was hoped that this would be a new beginning for Germany, and that democracy would be successful. Many historians have commented that the Weimar Republic was "doomed from the start". However, if this were the case, it seems strange that such a supposedly shaky establishment managed to last for 14 years, and overcame many tests during this period, particularly between 1919 and 1923. Therefore, it is not completely clear that the collapse of the Weimar Republic was inevitable Problems started for the Weimar Republic as soon as it got into power. Two days after the republic was declared in Germany, Weimar politicians signed an armistice with the allies to end the war. However, to many Germans, these politicians became known as the "November Criminals" as part of the "stab in the back" theory, used extensively by the extreme right. Clauses in the Treaty of Versailles such as the loss of land to Poland, and the reduction in the size of Germany's armed forces left the German public with the sense betrayal by the politicians, and a bitter resentment towards the Republic itself. Therefore the legacy that had been left behind by the Tsar had caused some Germans to dislike the Weimar Republic from the start. ...read more.

Examples of this can be seen in the Kapp Putsch and the French Occupation of the Ruhr. In both cases, the government asked the German people to help it by means of a strike, and the people did what the government asked, which enabled the Weimar Republic to survive these events. Also, the Munich Putsch could have started the loss of Law and Order in Germany; however, it was put down by the local authorities. Again the police force and army stayed loyal to the Government. Therefore, maybe the collapse of the Weimar Republic wasn't inevitable, as it did seem to have a fair bit of popular support before 1923. The period from 1924 to 1929 is often known as "the golden years of the Weimar Republic." There was much economic stability in the 1920's, mainly thanks to Germany's Chancellor from November 1923, Gustav Stresemann. This was quite ironic, as Stresemann had originally been anti-Weimar and pro-monarchist. As chancellor, he did much to ensure that the Weimar Republic survived the economic crisis it faced. He introduced a new currency, the Retenmark, in order to stop hyperinflation. He also acted decisively to prevent the rise of communism in Saxony, and refused to be panicked by the activities of the extreme right in Bavaria. In the mid to late 1920's Germany had a very stable currency, competitive interest rates and an increasingly settled place in the international community. However, in a number of respects, the Weimar economy was structurally unsound. ...read more.

The Enabling Law of 1933 basically made Hitler the dictator of Germany, thus completely destroying democracy in Germany. It gave him powers to make laws, control the budget, and approve treaties with foreign governments. Democracy in Germany had well and truly been abolished. From the very start, the Weimar Republic faced opposition from both sides of the political spectrum. The public blamed Germany's problems on the Treaty of Versailles, and in turn, blamed the government that signed it. This, along with the lack of democratic experience in Germany, and the proportional representation system, it would seem that the collapse of the Weimar Republic was inevitable. However, with all the challenges it faced in its early years, surely if the regime was going to collapse, it would have done so before 1923, whereas it actually seemed quite strong at this time. Therefore, there must have been other factors that caused its collapse. I think that the Wall Street Crash and the depression that followed it was probably the main contributor to the collapse of the Weimar Republic, along with Hitler being chosen as chancellor in 1933. The depression made people blame the German public blame all its problems on the government. They looked for an alternative, and the Nazi's seemed to have all the answers. Once Hitler had been appointed chancellor in 1933, his destiny was in his own hands, and there was no stopping him becoming dictator of Germany. The Enabling Law that made Hitler dictator of Germany, was only in effect the "nail in the coffin" of the Weimar Republic. Democracy had been dead in Germany for a number of years, and the Enabling Law just made it formal. ...read more.