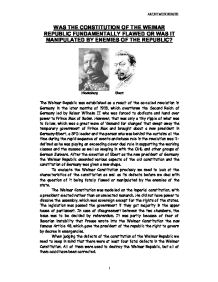 WAS THE CONSTITUTION OF THE WEIMAR REPUBLIC FUNDAMENTALLY FLAWED OR WAS IT MANIPULATED BY ENEMIES OF THE REPUBLIC? Hindenburg Ebert The Weimar Republic was established as a result of the so-called revolution in Germany in the later months of 1918, which overthrew the Second Reich of Germany led by Kaiser Wilhelm II who was forced to abdicate and hand over power to Prince Max of Baden. However, that was only a tiny ripple of what was to follow, which was a great wave of 'demand for changes' that swept away the temporary government of Prince Max and brought about a new president in Germany-Ebert, a SPD leader and the person who was behind the curtains all the time during the rapid sequence of events and whose role in the revolution was ill-defined as he was playing an exceeding clever dual role in supporting the working classes and the masses as well as keeping in with the OHL and other groups of German Junkers. After the elevation of Ebert as the new president of Germany the Weimar Republic amended various aspects of the old constitution and the constitution of Germany was given a new shape. To evaluate the Weimar Constitution precisely we need to look at the characteristics of the constitution as well as its defects before we deal with the question of it being fatally flawed or manipulated by the enemies of the state. ...read more.

Allocation of presidential powers Third, there was a definite defect in the allocation of presidential powers. The powers were not carefully limited. A chancellor could be dismissed even before he was defeated in the Reichstag by a vote of no confidence. A chancellor could also be appointed by the president, even if he had no chance of getting the support of the Reichstag. He could thus sign decrees dissolving the Reichstag and rule by decree in its absence. The constitution provided no minimal guarantees for the control add limitation of police powers in such cases. Under a democratic president there would have been no opportunity for a "sliding revolution" under legalistic disguise. Moreover if presidential rights had been limited, Hindenburg could not have dismissed Br�ning in 1932. Nor could he have appointed Papen or dissolved the Reichstag with the latter's futile counter-signature, or removed the Prussian ministers, or suspended individual rights without limitation. Up to April 1932, the first and second defect (proportional representation and popular election of the president) existed only in theory. Besides, the 2/3 votes necessary to amend the constitution would have been difficult to get in the Reichstag. To change proportional representation it would have been necessary to persuade 2/3 of the Reichstag deputies that they were incompetent! ...read more.

These were all the fatal flaws in the constitution. When we intend to detect those instances when the constitution was manipulated by enemies of the republic we must at first look at the pre-republic SPD withdrew from the government in 1923-28 meaning that anti-republic DNVP came into the coalition. The Article 48 was used by Hindenburg to support Bruning, Papen, Schleicher, and Hitler which were most probably the sources of the ultimate destruction of the republic. State administrations like Bavaria became centres for right wing anti-republicans who were supported by the judiciary. The recognition of unions and quite a large number of promises made by the government concerned with welfare provisions worried the elites. Thus we see that although the Weimar Republic had all the necessary components for democracy often this fact was only on paper. However, the all-important balance between them was potentially flawed, in ways which could not have been apparent to the jurists who framed the constitution and the politicians who amended it. Part of the pressure which distorted this balance came from internal malfunctions, and the rest from right wing influences which exploited the imbalances and used the democratic constitution to destroy constitutional democracy in Germany and their continual efforts ultimately led to the destruction of the Weimar Republic. ARUNI MUKHERJEE 1 ...read more.