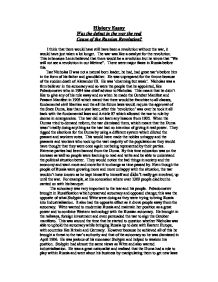 History Essay Was the defeat in the war the real Cause of the Russian Revolution? I think that there would have still have been a revolution without the war, it would have just taken a lot longer. The war was like a catalyst for the revolution. This is because Lenin believed that there would be a revolution but he wrote that "We will not see a revolution in our lifetime". There were major flaws in Russia before this. Tsar Nicholas II was not a natural born leader, he had, had great tsar's before him in the form of his father and grandfather. He was unprepared for the throne because of the sudden death of Alexander III. He was 'charming but weak'. Nicholas was a firm believer in the autocracy and so were the people that he appointed, like Pobedonostev who in 1984 was chief advisor to Nicholas. This meant that he didn't like to give any of his rule away and so when he made the October Manifest and Peasant Manifest in 1905 which stated that there would be franchise to all classes, fundamental civil liberties and the all the future laws would require the approval of the State Duma, less than a year later, after this 'revolution' was over he took it all back with the fundamental laws and Article 87 which allowed the tsar to rule by decree in emergencies. The tsar did not learn any lessons from 1905. ...read more.

With the church turning against the tsar because of his leniency with Rasputin the pillars of tsarism which kept the autocracy was already starting to crumble. Rasputin is also not to be blamed entirely for the revolution as he was only 'a symptom o the downfall to the autocracy, not a cause'. He was opposed to war and tried to urge the tsar to reconsider his decision about joining the war. Also he was assassinated in December 1916 by Prince F.F. Yusupov and V.M. Puriskevitch, his death was not met with sadness, infact it had the opposite effect. Some people blame his assassins for the revolution as no-one had Rasputin to fear anymore just like the peasants didn't have to fear Stolypin. The population had been increasing in the cities which made conditions very cramped and poor. This made even more reasons to strike and the numbers were greater, so when there was a revolution in Petrograd there were more people to join the opposition and they were in a more condensed space. There were many strikes because of poor working condition. Factory inspectors recorded the number of strikes that they found so not even all the strikes were counted in the final figures as there were not many inspectors and that is why the working conditions were poor. The growth of the population in St Petersburg went from 1 905 600 in 1910 to 2 217 500 in 1914. ...read more.

There was a big rise in armaments production but this was at the expense of other everyday goods as the factories were being used for this new production (80% of the labour force was engaged in war production by 1916) and this made the people unhappy with the situation because of the price increase. Industrialists were doing Ok as the government was paying to use their factories but they wanted more economic freedom. Most were forced into accepting to let the government make their supplies in their factories as non-war industries often went out of business, so there was incentive there for them to join in the revolution but not as much as the peasants and workers as they were still being paid. Because of the war the Duma was dissolved in 1915 which meant that the people would have no say in what was going the happen in the war. Becaus Nicholas took over the army he was solely to blame for the massive defeats. While he was on the front his wife was under the influence of Rasputin, to which nobody liked. The war alienated the government from its supporters. The revolutionary in 1917 was spontaneous as the leaders of the opposition were still in Switzerland. The demonstrators weren't expecting the army to join forces with them despite the huge losses as they had always been loyal to the tsar and demonstrators had been shot just the day before. The people saw their chance and took it because there was more radicalisation. In the end they got their revolution. ...read more.