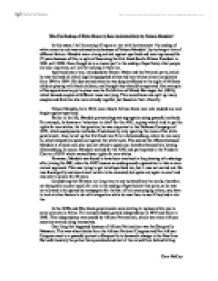 Was The Ending of White Minority Rule Achieved Only by Nelson Mandela?

Was The Ending of White Minority Rule Achieved Only by Nelson Mandela? In this essay, I will be seeing if I agree or not with the statement 'the ending of white minority rule was achieved only because of Nelson Mandela', by looking at lots of different factors. Mandela was a strong activist against apartheid and was imprisoned for 27 years because of this, in spite of becoming the first black South African President in 1994 until 1999. Even though he is a crucial part to the ending of apartheid, other people are also important, so I will be looking at them too. Apartheid was a law, introduced by Doctor Malan and the National party, which he was the head of, which legally segregated whites and non-whites almost completely from 1948 to 1994. His idea started when he was deeply affected at the sight of Afrikaan children playing with black children, and thought they should be separated. ...read more.

However, Mandela was found to have been involved in the planning of a sabotage after joining the MK, when the ANC became an underground organisation to take a more violent approach. This was trying to get rid of apartheid too, but it was not carried out. He was found guilty and was almost certain to be executed, but spoke out again in court and was sent to prison for 28 years. Considering that 28 years is a long time to say isolated from the world, therefore not being able to play much of a role in the ending of apartheid at this point, as he was not allowed to be quoted by newspapers for the fear of him encouraging others, you have to look at other factors to do with integration while he was there to see if they had a role too. In the 1950s and 60s, black governments were starting to replace white rule in some colonies in Africa. ...read more.

This was important as it started to get other countries involved and recognising the problem there. This would have put pressure on the government to abolish it. Also, pressure from the UN, the OAU and the Lusaka Conference was large for SA. The UN was a big country and every African nation wanted to be a part of it to help end apartheid. In the Lusaka Conference, the points were about racism, and how it should be condemned. This pressurised SA because it was a big organisation who were speaking out and could defy the SA government. African Nationalism was an important factor, as it gained support from other countries and helped replace white governments, and these helped to end apartheid. However, Mandela also tried to get other countries to recognise what was going on when he snuck out and also spoke out and gained support when he took part in things like the Defiance Campaign and the Freedom Charter, so in this case, I think Mandela was more important in ending apartheid. ?? ?? ?? ?? Ciara McCoy ...read more.

This is a focused response, with balanced evidence and a conclusion reached. Perhaps more could have been conveyed about Mandela's role as a symbol and inspiration, despite his long imprisonment. However, the author is correct to recognise the role of other factors. 4 out of 5 stars.