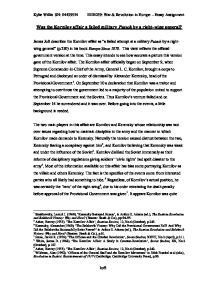 Was the Kornilov affair a failed military Putsch by a right-wing general?

Was the Kornilov affair a failed military Putsch by a right-wing general? James Joll describes the Kornilov affair as "a failed attempt at a military Putsch by a right-wing general" (p.230) in his book Europe Since 1870. This view reflects the official government version at the time. This essay intends to see how accurate a picture this version gave of the Kornilov affair. The Kornilov affair officially began on September 9, when Supreme Commander-in-Chief of the Army, General L. C. Kornilov, brought a corps to Petrograd and disobeyed an order of dismissal by Alexander Kerensky, head of the Provisional Government1. On September 10 a declaration that Kornilov was a traitor and attempting to overthrow the government led to a majority of the population united to support the Provisional Government and the Soviets. Thus Kornilov's venture failed and on September 14 he surrendered and it was over. Before going into the events, a little background is needed. The two main players in this affair are Kornilov and Kerensky whose relationship was taut over issues regarding how to maintain discipline in the army and the manner in which Kornilov made demands to Kerensky. ...read more.

Kerensky sent moment Savinkov was to Stavka to meet with Kornilov and pass this on to him, and thus Kornilov's plans gained some legal credence. Ukraintsev who was a member of the Commission of Inquiry into the Kornilov affair set up by the Provisional Government to investigate the events states, "We read and re-read the tape trying to discover in it something which could contradict General Kornilov's statement. In fact, a certain imprecision in some expressions was capable of causing doubt, but this was easily explicable by the necessity for General Kornilov to be fairly secretive, as the conversation was not conducted directly, but through an intermediary, namely the military telegraphist. There was the same lack of precision in Kerensky's expressions, obviously for the same reason. Taking this into account, the fact remained that we had in our hands a tape which provided incontrovertible material evidence that the calvary corps was advancing on Petrograd with the knowledge and consent if not of the whole Government, then of its head, and that the accusation against General Kornilov therefore collapsed. What in Petrograd had appeared as a crime of the Supreme Commander was transformed into a legal act and we, the Commission, found ourselves in a totally absurd position."10(p.291) ...read more.

To put the matter somewhat crudely: "Kerensky seized the most propitious moment, in order not to be eaten by Kornilov, but on the contrary to devour Kornilov himself." "12(p.297) It appears that due to Lvov's intervention, Kerensky became anxious that Kornilov's plans differed from his and wished to renege on the agreement thus he betrayed Kornilov. In light of this evidence it appears that neither Kornilov nor Kerensky were innocent in this affair. Kerensky had knowledge of Kornilov's plans to send the calvary corps to Petrograd and had in fact asked him to do as much. After Lvov's visit Kerensky believed he'd made a mistake and thus reneged on the agreement with Kornilov, and used it against Kornilov. Kornilov although believing he had the approval of the Provisional Government to do what he was doing, had been prepared to do so prior to any agreement with Kerensky. The fact of the matter is that there was an attempt at a military coup by Kornilov as when Kerensky called for his dismissal, he refused to step down. Essentially Kornilov had merely reverted to his original plans prior to his agreement with Kerensky. ...read more.