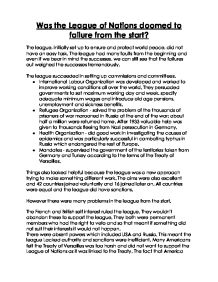 Was the League of Nations doomed to failure from the start?

Was the League of Nations doomed to failure from the start? The league, initially set up to ensure and protect world peace, did not have an easy task. The league had many faults from the beginning and even if we bear in mind the successes, we can still see that the failures out weighed the successes tremendously. The league succeeded in setting up commissions and committees. * International Labour Organization was developed and worked to improve working conditions all over the world. They persuaded governments to set maximum working day and week, specify adequate minimum wages and introduce old age pensions, unemployment and sickness benefits. ...read more.

Things also looked helpful because the league was a new approach trying to make something different work. The aims were also excellent and 42 countries joined voluntarily and 16 joined later on. All countries were equal and the league did have sanctions. However there were many problems in the league from the start. The French and British self interest ruled the league. They wouldn't abandon these to support the league. They both were permanent members who had the right to veto and so that meant if something did not suit their interests it would not happen. There were absent powers which included USA and Russia. ...read more.

However the court had no real power because it could not punish severely. Sanctions were meant to be the League's biggest weapon but without USA they didn't work. The League of Nations had no armed forces of its own. Britain and France never fought for the league. The league also did not meet frequently, only once a year and that with the slow sanctions created a big problem for the league. We can see from this information that the league was "a victors club". This means it was ruled by the who won the war. Britain and France had their own agendas, and wanted to protect their empire. The leagues real problem was that they could not impose any sanctions and so there isn't anything stopping countries from invading each other. Maryam Ali ...read more.