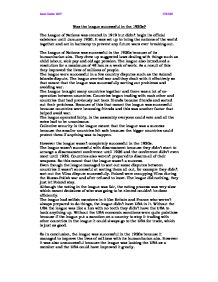 Was the league successful in the 1920s?

Was the league successful in the 1920s? The League of Nations was created in 1919 but didn't begin its official existence until January 1920. It was set up to bring the nations of the world together and act in harmony to prevent any future wars ever breaking out. The League of Nations was successful in the 1920s because of its humanitarian aim. They drew up suggested laws dealing with things such as child labour, sick pay and old age pension. The league also introduced a resolution for a maximum of 48 hours a week of work. As a result of this they improved the lives of millions of people. ...read more.

The league had selfish members in it like Britain and France who weren't always prepared to do things, the league didn't have USA in it. Without the USA the league was like a lion with no teeth they didn't have the USA to back anything up. Without the USA economic sanctions were quite pointless because if the league put a sanction on a country to stop it trading with other countries in the league it could always go to the USA for trade, which is just as good. So in conclusion, the league was successful in the 1920s because it managed to improve the lives of millions with its humanitarian aim. However it was also unsuccessful because the league was lacking the USA as a member and the USA could have improved it greatly. Jenni Calder 10FF 17/05/03 ...read more.