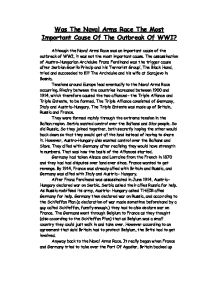 Was The Naval Arms Race The Most Important Cause Of The Outbreak Of WWI?

Was The Naval Arms Race The Most Important Cause Of The Outbreak Of WWI? Although the Naval Arms Race was an important cause of the outbreak of WWI, it was not the most important cause. The assassination of Austro-Hungarian Archduke Franz Ferdinand was the trigger cause after Serbian Gavrilo Princip and his 'Terrorist Group', The Black Hand, tried and succeeded to Kill The Archduke and his wife at Sarajevo in Bosnia. Tensions around Europe lead eventually to the Naval Arms Race occurring. Rivalry between the countries increased between 1900 and 1914, which therefore caused the two alliances- the Triple Alliance and Triple Entente, to be formed. The Triple Alliance consisted of Germany, Italy and Austria-Hungary. The Triple Entente was made up of Britain, Russia and France. ...read more.

Germany then declared war on Russia, and according to the Schlieffan Plan (a declaration of war made sometime beforehand by a guy called Schlieffan, funnily enough.) they had to also declare war on France. The Germans went through Belgium to France as they thought (also according to the Schlieffan Plan) that as Belgium was a small country they could just walk in and take over. However according to an agreement that said Britain had to protect Belgium, the Brits had to get involved. Anyway back to the Naval Arms Race. It really began when France and Germany tried to take over the Port Of Agadier. Britain backed up the French and consequently forced the Germans to retreat back home. This really put the wind up the German officer Kaiser Wilhelm. ...read more.

Germany said they didn't need a bigger navy than Britain, just one big enough to threaten them. Historians today have reason to believe that Germany had been planning to start a war long before WWI actually started in 1914, as the Schlieffan Plan was made a long while beforehand. This meant that the Germans should have had the upper hand, but because they had no idea about the extent of the British army they were dragged down quite considerably. In conclusion, they Alliance system and the rivalries between most of Europe were the most important causes of the outbreak of WWI. The Naval Arms Race, although it was an important cause, was probably not enough on its own to cause the war. Maybe the Germans lost this because the British had the advantage. Britain had 29 potentially Dreadnought-class ships by 1914, compared to Germany's 17. Also, Britain had the more experienced navy and officers. ...read more.