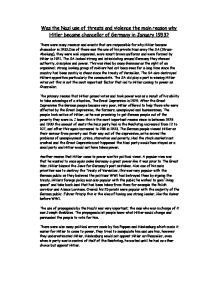 Was the Nazi use of threats and violence the main reason why Hitler became chancellor of Germany in January 1933? There were many reasons and events that are responsible for why Hitler became chancellor in 1933.One of these was the use of his private Nazi army the SA (Strum-Abeilung), they were well organised, wore smart brown uniforms and were formed by Hitler in 1921. The SA looked strong and intimidating around Germany they showed authority, discipline and power. This was liked by many Germans as the sight of an organised; strong looking group of soldiers had not been seen for a long time since the country had been mostly in chaos since the treaty of Versailles. ...read more.

The German people viewed Hitler as their saviour from poverty and their way out of the depression, as he solved the problems of unemployment, crime, starvation and poverty. Had the stock markets not crashed and the Great Depression not happened the Nazi party would have stayed as a small party and Hitler would not have taken power. Another reason that Hitler came to power was his political views. A popular view was that he wanted to once again make Germany a great power like it was prior to The Great War. Hitler blamed the Jews for Germany's past mistakes. Also one of his main priorities was to destroy the Treaty of Versailles, this was very popular with the German public as they believed the politians WW1 had betrayed them by signing the treaty. ...read more.

There were also many political errors made by Von Pappen and Hindenburg which made it easier for Hitler to come to power, they tried to manipulate him and use him, however they underestimated Hitler. Hindenburg would not appoint Hitler as Chancellor, even when is party was in control of Half of the Reichstag, he waited until he had no other choice but appoint Hitler. In conclusion the primary reason why Hitler came to power was because of the Great depression and his reaction to it. He saw this to offer not what the German people would like, but what they needed. Without the Great depression Hitler would not have taken power. The SA also played a part but this is not as important as the Great Depression. ?? ?? ?? ?? ...read more.