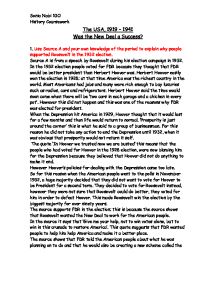 Was the New Deal a success

The USA, 1919 - 1941 Was the New Deal a Success? 1. Use Source A and your own knowledge of the period to explain why people supported Roosevelt in the 1932 election. Source A is from a speech by Roosevelt during his election campaign in 1932. In the 1932 election people voted for FDR because they thought that FDR would be better president than Herbert Hoover was. Herbert Hoover easily won the election in 1928; at that time America was the richest country in the world. Most Americans had jobs and many were rich enough to buy luxuries such as radios, cars and refrigerators. Herbert Hoover said the time would soon come when there will be 'two cars in each garage and a chicken in every pot'. However this did not happen and this was one of the reasons why FDR was elected for president. When the Depression hit America in 1929, Hoover thought that it would last for a few months and then life would return to normal. 'Prosperity is just around the corner' this is what he said to a group of businessman. For this reason he did not take any action to end the Depression until 1932, when it was obvious that prosperity would not return it self. The quote 'In Hoover we trusted now we are busted' this means that the people who had voted for Hoover in the 1928 election, were now blaming him for the Depression because they believed that Hoover did not do anything to make it end. However Hoover's policies for dealing with the Depression came too late. So for this reason when the American people went to the polls in November 1932, a huge majority decided that they did not want to vote for Hoover to be President for a second term. They decided to vote for Roosevelt instead, however they were not sure that Roosevelt could do better, they voted for him in order to defeat Hoover. ...read more.

Source H is a source that is for Roosevelt. The source is an American cartoon, which was published in 1933 called 'Yes, you remembered me'. In the source it shows that Roosevelt is shaking hands with 'the forgotten man' who is a worker with a working tool in his hand. This shows that the source is for Roosevelt because Roosevelt was helping the poor by creating jobs for them as well with dealing with the depression and the huge figure of the unemployment. In the 1932 election it was the poor Americans 'forgotten' people who voted for Roosevelt into office in the election. Source I is an American cartoon published in 1933 called the 'New Leadership'. In the source it shows Roosevelt dragging a donkey who is attached to a carriage and Roosevelt is running towards emergency legislation with a huge amount of people who are following him. The people sat in the carriage look happy and the crowd have got signs. One of the signs that are held by the crowd is 'congress' meaning the government. 7. Study Sources J and K. Why do you think these people disagree about the New Deal. Explain your answer. Source J is by S.B. Fuller, a self-made businessman speaking in 1980 and remembering the time of the New Deal. The source is against the New Deal because it says 'the New Deal hurt us'. The source explains that Roosevelt was a rich mans son who was given everything he had. The source suggests that people had 'soup lines and the Depression because men lost confidence in themselves. This suggests that it was mainly because things were taken from people or were given to them in a bad manner which hurt them and made them lose their confidence in themselves. The source also says 'Welfare kills a mans initiative'. I think this is being referred to Roosevelt. ...read more.

The source is showing that Roosevelt is using more and more money to prime the New Deal. This source means that the huge amount of money that Roosevelt was spending was all being wasted. As I have written above in question 6 the things that Roosevelt was wasting money on were things like the boondoggle jobs which were created for the unemployed. However the jobs that they were given were not good. this was because as I have mentioned before the jobs were like sweeping leaves form pavements and scaring birds, jobs like these were not doing the government any good because leaves could be blown away by the wind and birds will go away or even come back after the person with the balloons in their hands was gone. Jobs like these were making matters worse for the government because the New Deal programme was wasting money on unimportant things. Two other sources that are against the New Deal are sources J and L. The source is mainly about Roosevelt and how the rich thought that he was given everything because he was born in to a rich family. The source also says that the New Deal hurt them because they things were taken away from them. Therefore this source is against the New Deal because it shows that the New Deal did not do anything to help the rich but instead it took things away from them like more taxes. Source L is also against New Deal. The source L is a letter from an elderly couple, which was published by Roosevelt's supporters as part of the election campaign in 1936. The source tells us that Roosevelt had helped an elderly couple with their mortgage for their house and got their furniture back for them after it had been taken away because they were unable to pay their mortgage. This shows that Roosevelt liked especially by the elderly and the people who he helped and also the poor and unemployed for helping them by making their lives better. Sonia Nabi 10O History Coursework ...read more.