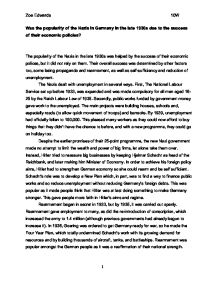 Was the popularity of the Nazis in Germany in the late 1930s due to the success of their economic policies?

Was the popularity of the Nazis in Germany in the late 1930s due to the success of their economic policies? The popularity of the Nazis in the late 1930s was helped by the success of their economic polices, but it did not rely on them. Their overall success was determined by other factors too, some being propaganda and rearmament, as well as self-sufficiency and reduction of unemployment. The Nazis dealt with unemployment in several ways. First, The National Labour Service set up before 1933, was expanded and was made compulsory for all men aged 18-25 by the Reich Labour Law of 1935. Secondly, public works funded by government money gave work to the unemployed. The main projects were building houses, schools and, especially roads (to allow quick movement of troops) ...read more.

In order to achieve his foreign policy aims, Hitler had to strengthen German economy so she could rearm and be self sufficient. Schacht's role was to develop a New Plan which, in part, was to find a way to finance public works and so reduce unemployment without reducing Germany's foreign debts. This was popular as it made people think that Hitler was at last doing something to make Germany stronger. This gave people more faith in Hitler's aims and regime. Rearmament began in secret in 1933, but by 1935, it was carried out openly. Rearmament gave employment to many, as did the re-introduction of conscription, which increased the army to 1.4 million (although previous governments had already begun to increase it). ...read more.

Overall, the success of the Nazis was mainly due to that of their economic policies, as when their policies failed, they became less popular. The Nazis were popular due to the fact that the economy was improving, partly due to them, but mostly to do with the previous government and an increase in world trade. Also, in the late 1930s, the majority of the German population could only remember the years and years of trouble and prosperity after the Wall St Crash, and not the years of prosperity and believed that what the Nazis were doing was so great. This was true, compared to the years after the Wall St Crash, life now was great, but in itself, it was not. They believed that Hitler was making things better, when in reality, things would have probably improved by themselves anyway. ?? ?? ?? ?? Zoe Edwards 10W 1 ...read more.