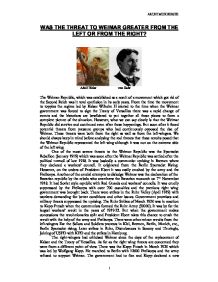 Was the threat to Weimar greater from the left or from the right?

WAS THE THREAT TO WEIMAR GREATER FROM THE LEFT OR FROM THE RIGHT? Adolf Hitler von Kahr The Weimar Republic, which was established as a result of a movement which got rid of the Second Reich was it total confusion in its early years. From the time the movement to topples the regime led by Kaiser Wilhelm II started to the time when the Weimar government was forced to sign the Treaty of Versailles there was a rapid change of events and the historians are bewildered to put together all these pieces to form a complete picture of the situation. However, what we can say clearly is that the Weimar Republic did survive and continued even after these happenings. But soon after it faced potential threats from pressure groups who had continuously opposed the rise of Weimar. These threats were both from the right as well as from the left-wingers. We should always keep in mind before analysing the real threats that these revolts posed that the Weimar Republic represented the left wing although it was not on the extreme side of the left wing. One of the most severe threats to the Weimar Republic was the Spartacist Rebellion (January 1919) which was soon after the Weimar Republic was settled after the political turmoil of late 1918. ...read more.

Many right wing terrorist groups developed and their primary aim was to kill prominent Weimar politicians. Walter Rathenau was one of the greatest Weimar statesmen. In June 1922 he was assassinated by a terrorist group called Organisation Consul. A he was a Jew the right-wingers tended to be racist towards him. Another of the threats that came for Weimar from the right was the Munich Putsch. Although it was ill-planned its significance lies in the fact that it was led by some of the most prominent personalities in German politics along with Adolf Hitler who takes this opportunity to try and overthrow the Weimar regime. He marches to Munich with 2000 armed Nazis and General Ludendorff although the Government had separated von Kahr and von Lossow from the movement by declaring emergency and President Ebert ordering the armed forces to crush the movement. In Munich the Nazis and the German forces met and 14 Nazis were killed including the person next to Hitler. Ludendorff and Hitler were arrested. From the above narration of the events that took place in Germany during 1919-23 posing threats to Weimar were particularly significant for Weimar Republic. To analyse the weight of each threat we must look at their significance separately. ...read more.

Te public too did not support acts like assassination of Weimar politicians. The right did have a paramilitary force of 250,000 but they were disbanded in 1920 in compliance to the Treaty of Versailles. Thus we see that the Weimar republic did survive after all these attempts in its early years to dislodge it but I had to squeeze out the last bit of its strength to do so. In many occasions President Ebert and his regime were under tremendous pressure. Comparing the threats from both sides we have to say that their perspectives were quite different but what similar was their motive. But finally, we have to conclude by saying that maybe the threats from the right were more threatening for Weimar as they looked more ominous than the left ones. Amidst all these movements to try to overthrow Weimar we see the gradual arrival and establishment of an individual who, although was not significant in a large way in the current turmoil but the person who would eventually be the cause of the destruction of this democratic regime named Weimar. Who might have thought that this man by the name of Adolf Hitler would emerge as the greatest threat to Weimar in the years to come and ultimately halt its progress. ARUNI MUKHERJEE 1 ...read more.