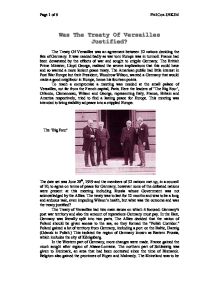 Was The Treaty Of Versailles Justified?

Was The Treaty Of Versailles Justified? The Treaty Of Versailles was an agreement between 32 nations deciding the fate of Germany. It was needed badly as war torn Europe was in turmoil. France had been devastated by the effects of war and sought to cripple Germany. The British Prime Minister, Lloyd George, realised the severe implications that this could have and so wanted a more lenient peace treaty. The American public had little interest in Post War Europe but their President, Woodrow Wilson, wanted a Germany that would make a good neighbour in Europe, hence his fourteen points. To reach a compromise a meeting was needed at the small palace of Versailles, not far from the French capital, Paris. Here the leaders of 'The Big Four', Orlando, Clemenceau, Wilson and George, representing Italy, France, Britain and America respectively, tried to find a lasting peace for Europe. This meeting was intended to bring stability ad peace into a crippled Europe. The date set was June 28th, 1919 and the members of 32 nations met up, in a council of 10, to agree on terms of peace for Germany, however none of the defeated nations were present at this meeting including Russia whose Government was not acknowledged by the Allies. The treaty was to last for 12 months and was to be a long and arduous task, even impeding Wilson's health, but what was the outcome and was the treaty justified? The Treaty of Versailles had two main issues on which it focused: Germany's post war territory and also the amount of reparations Germany must pay. ...read more.

Germany realized that there was no way they could pay the reparations if their industrial territories, such as the Saar Basin, and their colonies were taken away. Unfortunately, the Allies did not see this. With the counter-proposals denied, Germany's only other option was to resort to printing more money. This would cause massive inflation, further devastating the German economy. In 1918, there were seven German Marks to the United States Dollar. In 1923, 4,210,500,000,000 Marks equalled the dollar! Germany's last economic resort had been disastrous. German aggression was greatly aroused by the ridiculous and often mistaken territorial adjustments made by Britain and France. One such incident was in the transfer of German territory to Poland. The allies had determined that the territory of Allenstein, in the eastern part of Germany should be given to Poland. The German delegation sent a counter-proposal stating that Allenstein had a large German population, and the Polish population was miniscule. Clemenceau answered this proposal by saying, "It is difficult to understand the objections raised by the German delegations ... According to the best of our information there exists in the Government of Allenstein a considerable Polish majority." When a plebiscite was actually held there, 97.9% of the population voted to be part of Germany, with the remaining 2.1% wanting to join with Poland. Although Allenstein was eventually granted to Germany, the main problem is obvious. The Allies postponed other plebiscites in Upper Silesia, most likely to prevent a similar setback from occurring. ...read more.

The loss of territory imposed by the Allies took a sizeable chunk of Germany's wealth and reduced her population by 7.5 million Germans, thus undermining Wilson's ideas on self-determination. As the above text has shown this was a reasonable argument as whenever a vote was held in the disputed country the Germans nearly always won. In my view I think that the Treaty Of Versailles was unjust for a variety of reasons. The first is that not one of the 'Big Four' was satisfied with the Treaty Of Versailles, the British disagreed with the French who disagreed with the Americans who disagreed with the Italians; they collaborated slowly and unwillingly, which is not good for an alliance. The reparations neither crippled nor let off Germany. The Reparations should have been more corpulent as Germany was still the most economically sound country in Europe. Another factor, which aided my decision, was that the 'Big Four' often ignored expert advisors and were out to seek revenge on Germany. Another problem with the treaty was that there was no way that the Allies could enforce the army size without direct action, which would lead to another war. In my view the treaty was not very well thought out, as it satisfied no one, and it is not very encouraging when four Allies begin to fall out with one another. The Treaty Of Versailles was not justified, as it was a compromise which fell between two very extremist views, rather like trying to make a compromise between a far right-wing political party and a far left wing political party, it was a catch-22 situation. ?? ?? ?? ?? Page 1 of 3 Phil Cox-U4KJM ...read more.

The author has a hugely impressive range of accurate knowledge and expresses his ideas well. There is perhaps too much background information and one side of the argument is more well developed than the other, but all important points are addressed with excellent use of evidence and confident analysis. 5 out of 5 stars.