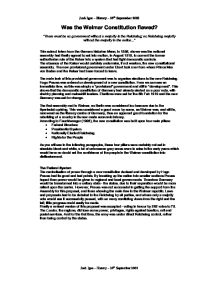 Was the Weimar constitution flawed?

Was the Weimar Constitution flawed? "There must be no government without a majority in the Reichstag; no Reichstag majority without the majority in the nation..." This extract taken from the German historian Mann, in 1996, shows was the national assembly had finally agreed to set into motion, in August 1919, to convert the former authoritarian rule of the Kaiser into a system that had tight democratic controls. The absence of the Kaiser would certainly undermine, if not weaken, the new constitutional assembly. The new provisional government under Ebert took over from where Prince Max von Baden and the Kaiser had been forced to leave. The main task of this provisional government was to organise elections to the new Reichstag. Hugo Preuss was ordered on development of a new constitution. Here we can see an immediate flaw, as this was simply a "provisional" government and still in "development". This shows that the democratic constitution of Germany had already started on a poor note, with shabby planning and makeshift leaders. Elections were set for the 6th Feb 1919 and the new Germany was set for change. ...read more.

And for the first time, the army was under direct Reichstag control, rather than being control by the states. Presidential Structure The President was now the highest position in the land. He was given a 7 year term of office and served to maintain certain roles: * Command of the Armed Forces * Appointment and dismissal of the Chancellor * Dissolve the parliament and order new elections * Order referendums * Article 48 - gave the president the right of absolute control to dissolve parliament and its suspension in a time of national crisis. Therefore, the President was simply a replacement Kaiser, in that he could have absolute control, could dismiss whoever whenever, in light of objection from the Reichstag they could be dismissed replaced and ignored. Certainly the period 1930-33 was ruled almost exclusively by invoking Article 48. So, under the new constitution had anything really changed? Nationally Elected Reichstag Under the new constitution, all men and women above the age of 20 were allowed to vote. Elections to the Reichstag had the system of proportional representation. According to Feuchtwanger, Germany was divided into 35 districts for voting, with parties putting up candidates in these districts. ...read more.

Rights for the People and Conclusion However, its not all doom and gloom for the constitution. Under the Weimar republic a special section was outlined of the basic rights that were to be enjoyed by all German citizens - the first time such rights had been guaranteed. This guaranteed a permanent civil service, protected religious denominations and gave the basic structure of the education system. It included declarations for the benefits of families, as well as the rights of illegitimate children to be equal to the rights of legitimate children. Nationalisation was set into motion, with the proposed take-over of private companies into public ownership. Safety measures for workers, welfare insurance, job centres (labour exchanges), unemployment benefits and the right to join trade unions. These things in the Weimar constitution were certainly positive. However, they are far out measured by the weight of an irritating democracy where nothing ever seemed to get done, and the eventual take-over of an extremist party, of which many could argue, should have never been able to get a single seat in the Reichstag in the first place. Josh Igoe - History - 29th September 2003 Josh Igoe - History - 29th September 2003 ...read more.