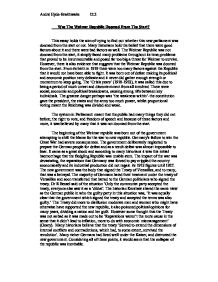 Was The Weimar Republic Doomed From The Start?

Was The Weimar Republic Doomed From The Start? This essay holds the aim of trying to find out whether this new parliament was doomed from the start or not. Many historians hold the belief that there were good factors about it and there were bad factors as well. The Weimar Republic was not doomed from the start, it simply faced many problems throughout its time; problems that proved to be insurmountable and posed far too big a threat for Weimar to survive. However, there is also evidence that suggests that the Weimar Republic was doomed from the start. From its birth in 1919 there were too many factors against the Republic that it would not have been able to fight. It was born out of defeat making its political and economic position very delicate and it never did gather enough strength or momentum to keep going. The 'Crisis years' (1918-1923), it was called this due to being a period of much unrest and discontentment from all involved. There were social, economic and political breakdowns, causing strong rifts between key individuals. The greatest danger perhaps was 'the weakness within'-the constitution gave the president, the states and the army too much power, whilst proportional voting meant the Reichstag was divided and weak. The system in Parliament meant that the public had many things they did not before; the right to vote, and freedom of speech and because of these factors and more, it was believed by many that it was not doomed from the start. ...read more.

It was also around this time that hyper inflation came about. A historian by the name of Henny held expressed this fact, 'Inflation escalated to hyper inflation, emphasising a big economical problem' Weimar was only seen as a compromise as no one could really think of a better solution, people were all too glad for change. However, quite soon the novelty of this new government began to tire, certain political parties hated Weimar and worked actively to destroy it, these parties included Nazi's, Nationalists and communists. The Left wing Spartacist group, lead by Luxemburg and Liebknecht, admired the new Russian Communist political system, and with the fall of the Kaiser, saw an opportunity to attempt to place Germany into a similar system. In January 1919 they revolted, and tried to take control of Berlin, with the support of the USDP they proclaimed a new revolutionary government. However, Ebert had already won the support of the military with the Ebert-Groener pact, and the troops suppressed the revolt. This pact was significant, the government had associated itself with the right, and perhaps this early incident is one of the factors which would convince the government to appoint Hitler Chancellor in 1933; a decision which, of course would lead to the Weimar republic's ultimate downfall. At this time, Hitler himself fought hard undermine Weimar, 'Egged on by veterans of both the imperial army and freikorps, even general Lundendorff by his side, in November 1923 Hitler led attempt to overthrow by force the Bavarian government.' ...read more.

It was also in these final years of Weimar that the Wall Street Crash came upon Germany, blighting them severely. The Wall Street crash did not affect her straight away though; it hit America first before hitting Germany in the early 1930's. It was said by historian Geary that '(There were)...Withdrawal of loans due to the Wall Street crash, this meant problems for Weimar and fear for the future.' The role of certain individuals was also detrimental to Weimar's final demise too. It was then President Hindenburg that made a very important decision, a decision that would later change the entire face of history. This particular feat was the controversial decision of making Adolf Hitler Chancellor in January 1933. However this did not end Weimar straight away, it died a slow and agonising death, with Hitler easily amounting enough support from the discontented working class. This simply marked the beginning of the end of Weimar as people knew it. In many people's opinions the Weimar republic was not doomed from the start, even after this has been decided it is indeed hard to exactly pin point when Weimar began to fail. Many believed that it happened from as soon as the Treaty of Versailles was signed in 1923. Geary held this view which I indeed, agree with, 'It was not 1923 that was crucial, it was the collapse of 1929-33 that was really the ultimate failure of Weimar in allowing Hitler to drum up support from the discontented working class.' Andr� Hyde-Braithwaite 12.2 ...read more.