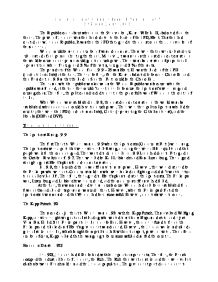 Was the Weimar Republic doomed from the start?

Was the Weimar Republic doomed from the start? By Simon Garner 10NB The Republic came about when in on the 9 November, Kaiser Wilhelm II, abdicated from the throne. The power of Germany was then handed over to the leader of the SPD, Ebert. This then had created a new German Republic. It was then the SPD that agreed to the armistice on the 11 November of the same year. Weimar could be seen in a number of was a democracy. These were that now you elected your ruler instead of one person inheriting the throne. Moreover, it was seen as the most democratic system in the world because no one person could gain too much power. There was also a system of proportional representation where if you gained 20% of the votes, you gained 20% of the seats. The president of the Weimar from 1919 - 25 was Ebert. He was the leader of the SPD (moderate Socialists) at the time. The year before, after the Kaiser abdicated he became Chancellor and then President in 1919 so that the leader of another Party could be the Chancellor. The reason why the republic was known as the Weimar Republic was because when the republic was formed, at the time they couldn't meet in Berlin because the Spartacist's were rising and causing chaos. ...read more.

Stresemann then introduced a new currency called the Retenmark and ended the problem of Hyperinflation. The Munich Putsch 1923 When Streseman announced the end of the Ruhr Strike, in was considered as giving in to the enemy. Hitler, an extreme right wing nationalist-wanted to take power to take power as dictator and reject Versailles, was the leader of the Nazi Party and planned to seize Munich and then go north and seize power in Berlin. This was known as the Munich Putsch. However, it failed when the local police opened fire. Hitler was then imprisoned where he wrote Mein Kampf. Therefore, Weimar had survived 4 major threats and so looked as if it could cope with anything. Therefore, looking at it, it looks like Weimar wasn't doomed from the start. The "Golden Years" The period from 1924-9 was classified as the "golden years" of the Weimar Republic by the historian Feuchtwanger. The reason being that each year improved on the previous. The reason being that in 1924 the Dawes Plan was proposed. Dominated by Stresemann (leader of the DVP) who was foreign minister from 1923-9 when he died, days before the Wall Street crash. ...read more.

Then there was the Kapp Putsch when he tried to seize power in Berlin but then the workers went on strike and caused the Kapp Putsch to fail. Thirdly, there was the economic disaster when hyperinflation was caused when the French army seized the Ruhr. However, Streseman solved this by introduced a new currency called the Retenmark (Deutsch Mark today) and the German currency was back to normal. Finally, the Munich Putsch involved Hitler trying to seize power in Munich. However, he failed when the police opened fire and Hitler was imprisoned where he wrote Mein Kampf. However, after the 4 years of utter chaos in Germany, the period of the "golden years" began. This was a period of stabilisation of which each year improved on the next. However, when the Great Depression hit, the World Economy had collapsed and hit Germany hard. Moreover, the major political parties in Germany were unable to cope with the situation and so when the next election came round millions of German's voted for the Nazi Party and got Hitler into power. Therefore, Weimar was not doomed from the start because if had of been then it wouldn't have lasted 15 years and the four major hits of which it took in its first four years. And it was the collapse of the American economy, which bought Hitler to power and the end of the republic. ...read more.