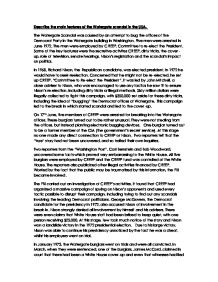 Describe the main features of the Watergate scandal in the USA. The Watergate Scandal was caused by an attempt to bug the offices of the Democrat Party in the Watergate building in Washington. Five men were arrested in June 1972. The men were employed by CREEP, Committee to re-elect the President. Some of the key features were the secretive activites CREEP, dirty tricks, the cover-up, role of television, senate hearings, Nixon's registration and the scandal's impact on politics. In 1968, Richard Nixon, the Republican candidate, was elected president. In 1972 he would have to seek-reelection. Concerned that he might not be re-elected, he set up CREEP, "Committee to Re-elect the President". It was led by John Mitchell, a close adviser to Nixon, who was encouraged to use any tactics he saw fit to ensure Nixon's re-election, including dirty tricks or illegal methods. Sixty million dollars were illegally collected to fight this campaign, with $350,000 set aside for these dirty tricks, including the idea of "bugging" the Democrat offices at Watergate. This campaign led to the break in which started scandal and led to the cover-up. On 17th June, five members of CREEP were arrested for breaking into the Watergate offices. These burglars turned out to be rather unusual. They were not stealing from the offices, but instead planting electronic bugging devices. ...read more.

He also announced an investigation with Archibald Cox appointed as special Watergate prosecutor. Although Nixon denied everything to break-in, he did confess that his two top advisers were involved. The senate became overly suspicious by this, believing that Nixon was hiding vital information. The investigation was headed by Senator Sam Ervin. The Senate Watergate Committee heard evidence between May and November 1973. In the televised public hearing it became clear that very senior White House Officials were involved. Three of Nixon's leading advisers resigned. One of the, told the investigation that he had discussed the Watergate burglary at least 35 times with Nixon. Nixon still denied any involvement. Nixon was digging himself deeper in his lies, making more people suspicious. It was a matter of time before he became uncovered. The most significant evidence was from one White House aide who told the Senate Committee that in 1971 Nixon had installed a tape-recording system in the White House and that all the President's conversations had been taped. Both the Senate Committee and Cox asked Nixon to hand over the tapes. He refused, insisting it would breach national security and sacked Cox on 20th October. The Attorney General resigned in protest. The new prosecutor, Leon Jaworksi, also demanded the tapes. Nixon handed over seven of the nine tapes but they had been heavily edited- one of them had eighteen minutes missing. ...read more.

Everything was exposed, and thus no-one can do anything secretly to change information. Moreover, stopping the President using federal money for personal reasons was to ensure that the new President would not abuse his position or the money he was granted, and take advantage of privileges he was given, again like Nixon. In conclusion, it must be argued that the Watergate scandal ruined USA's prestige abroad. Nixon was adamant to continue his presidency, thus he employed five burglars to bug the offices of the Democrat Party in the Watergate building in Washington. Throughout the scandal, Nixon persistently lied, and continued to maintain his innocence. He even appointed Archibald Cox as a special investigator. When challenged by the Senate, he adamant he was innocent, until asked for the tapes, which he refused to hand over. This caused great suspicion, as it portrayed Nixon was hiding key information. At last, Nixon handed over the tapes. However, clips were edited out, and his vulgar language was seen nationally. The US public were appalled by this, as they trusted and believed in Nixon. The tapes proved that Nixon had lied and that he had tried to prevent the investigation, but not that he had known about the original break-in. Congress decided to impeach Nixon, but to save himself from humiliation and disgrace he resigned. The Watergate Scandal clearly showed that Nixon was unable to continue his Presidency through cheating, and dirty tricks. Many people were mortified by Nixon's ruthless actions, and hypocrisy, and lost faith in US politics. ...read more.

The student has answered the question of "describing the Watergate Scandal" very well, however, fails to "explain the significance" of the event. Whilst not explicit in the question set (and depending on the exam board), the explanation can rarely be ...

The student has answered the question of "describing the Watergate Scandal" very well, however, fails to "explain the significance" of the event. Whilst not explicit in the question set (and depending on the exam board), the explanation can rarely be overlooked. At times, the student does relate the asserted points to its significance in the scandal but this is not always obvious. The student has a very strong understanding of the events that happened before, during and after the scandal that is very obvious in the essay as they have presented it in a chronological order, detailling each stage that led to the scandal. To answer the essay, the student can adopt the approach to assume that the examiner knows all the events but doesn't quite understand the details and how it all links together. In this way, the student ensures that they address the question in a PEE (point, evidence, explain) way and will therefore answer all of the question. However, the student has tackled this question well as such questions are perhaps the hardest to answer.

The understanding of the events and the level of detail included in this essay is outstanding, however, as mentioned above, it does lack some analysis in places. The evidence is certainly obvious, but in this case, it is the making of judgements that has let this student down. The student's argument does not really become clear until the conclusion and offers no judgement to a main outcome to the scandal. The student adopts a 'sit on the fence' approach, which is very typical of GCSE students, but students should remember to always try and 'take a side and stick to it'. This offers a good lead to how to structure the essay as it gives the essay a 'for' and 'against' side for such questions. The conclusion was also a little repetitive, but this is almost unavoidable in many cases. Yet, it is worth trying to avoid the copying information from the paragraphs and just paraphrasing slightly in the conclusion as it doesn't do favours for the essay.

I found one spelling mistake and punctuation mistake along with a few questionable grammatical errors. Such mistakes do not leave a great impression for the examiner and is best avoided by thoroughly checking over the work. The technical terms used for appropriate for a GCSE student and it is commendable that the student defined CREEP the first time it appeared in the essay before going on to just using the abbreviation. One thing that I would draw the attention to (and it is very common), is the usage of speech and quote marks. "...." is used when quoting someone whilst '....' is used for colloquial terms or when highlighting word in the sentence (usually because it's not the best word to use but the definition of the chosen word is close enough to convey the idea). The student follows typical conventions of setting out the essay in chorological order and perhaps for this essay, it is the best way to structure it but this should be interlinked into the argument of the essay and should not guide the essay.