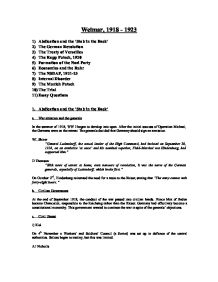 Weimar, 1918 - 1923 1) Abdication and the 'Stab in the Back' 2) The German Revolution 3) The Treaty of Versailles 4) The Kapp Putsch, 1920 5) Formation of the Nazi Party 6) Economics and the Ruhr 7) The NSDAP, 1921-23 8) Internal Disorder 9) The Munich Putsch 10) The Trial 11) Essay Questions 1. Abdication and the 'Stab in the Back' a. War situation and the generals In the summer of 1918, WW I began to develop into open. After the initial success of Operation Michael, the Germans were on the retreat. The generals decided that Germany should sign an armistice. WL Shirer "General Ludendorff, the actual leader of the High Command, had insisted on September 28, 1918, on an armistice 'at once' and his nominal superior, Field-Marshal von Hindenburg, had supported him." D Thomson "With news of unrest at home, even rumours of revolution, it was the nerve of the German generals, especially of Ludendorff, which broke first." On October 2nd, Hindenburg reiterated the need for a truce to the Kaiser, stating that "The army cannot wait forty-eight hours." b. Civilian Government At the end of September 1918, the conduct of the war passed into civilian hands. Prince Max of Baden became Chancellor, responsible to the Reichstag rather than the Kaiser. Germany had effectively become a constitutional monarchy. This government wanted to continue the war in spite of the generals' objections. c. Civil Unrest i) Kiel On 4th November a Workers' and Soldiers' Council (a Soviet) was set up in defiance of the central authorities. Sailors began to mutiny, but this was limited. AJ Nicholls "During the first few days after the Kiel disturbances power had changed hands in only a few north-western cities and only on a local level." ii) Munich A by-election campaign was changed into agitation for a republic. Faced with growing violence King Ludwig III (the last Wittelsbach monarch) ...read more.

The workers of the Ruhr declared a general strike and received financial support from the government in Berlin, which called for a campaign of passive resistance." AJ Nicholls "Businessmen, officials and workers were not to co-operate with the occupying powers. The Reich government met the financial losses involved in this resistance. Acts of sabotage were also organised by clandestine paramilitary groups under the authority of the Reichswehr." In France, the population supported Poincar�'s actions. The French government met sabotage with repression of workers, industrialists and civil servants, bringing French workers into the Ruhr to replace the Germans. Sabotage continued; one saboteur, Albert Schlageter, was shot and became a national hero. KD Bracher "The occupation itself proved highly uneconomical; it was unprofitable for the French economy and at the same time brought the passively resisting German economy to the brink of bankruptcy. The German currency fell disastrously ... The inflation brought impoverishment to large segments of the population." e. Inflation D Thomson "The government printed paper money recklessly until by November [1923] the mark had completely collapsed in value." The government printed more and more money to pay for the passive resistance in the Ruhr and to keep the economy running. Naturally, this caused rampant inflation and a drastic reduction in the mark's value. * January 1923: $1 = 18,000 Marks * July 1st, 1923: $1 = 160,000 Marks * August 1923: $1 = 1,000,000 Marks * November 1923: $1 = 4,000 million Marks Lord Bullock "On 15th November 1923, it took a million, million marks to equal the purchasing power of one 1914 mark." The effects were dramatic: the savings of the middle classes were wiped out; these people blamed the government - the Weimar Republic that had accepted the burden of reparations. The working classes, too, became embittered; the KPD began to experience increased membership. AJ Nicholls "Inflation ... was like a plague, affecting all classes whatever their political persuasion or social status." ...read more.

WL Shirer "The putsch, even though it was a fiasco, made Hitler a national figure and, in the eyes of many, a patriot and a hero. Nazi propaganda soon transformed it into one of the great legends of the movement." 11. Essay Questions The following lists are only suggestions; none are complete. Use all possible sources to answer essay questions, especially Vol. 1 of 'Nazism, 1919-1945' by J Noakes and G Pridham and 'Europe 1890-1990' by J Traynor. a. Why was there opposition to the Weimar Republic in the period 1919-23? * November Criminals and the 'Stab in the Back' * The acceptance of the armistice and Treaty of Versailles * Fear of Communism / extreme nationalism * Economic problems * Exciting leaders of opposition groups * Foreign 'encouragement' b. From where did opposition to the Weimar Republic come in the period 1919-23? * Extremes of politics, left and right: * Ordinary soldiers returning from the war * Organisations like the Freikorps * The army officer class * The working classes (economic discontent) * Social idealists * Nationalists, imperialists and monarchists c. Why did the opposition to the Weimar Republic fail in the period 1920-23? d. Why was the Weimar Republic able to survive the threats from inside Germany in the period 1919-23? * Division of opposition * Limited numbers of opposition * The army was not willing to rebel en masse, strengthening the government * Growing support for Weimar, especially in 1923 * The apathy of the majority of the population * Major parties contained opponents, therefore, people id not look to the extremists e. Why did the NSDAP attempt to gain power via a Putsch in 1923, and why did the attempt fail? * Economic situation * Hitler's ideas * Internal pressure * Foreign examples and successes * Lack of popular support * Weaknesses in the plan * The work of the triumvirate * The opposition of the army * Lack of force and strength in the Nazis * Document 3 in Vol. 1 of 'Nazism, 1919-1945' by J Noakes and G Pridham * p123, 'Europe 1890-1990' by John Traynor ...read more.