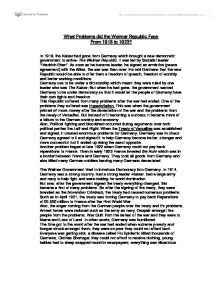 What Problems did the Weimar Republic Face From 1918 to 1923? In 1919, the Kaiser had gone from Germany which brought a new democratic government to arrive- The Weimar Republic. It was led by Socialist leader 'Friedrich Ebert'. As soon as he became leader, he signed an armistice (peace agreement) with the Allies, the war was then over. He told Germans that the new Republic would be able to offer them a freedom of speech, freedom of worship and better working conditions. Germany use to be under a dictatorship which meant they were ruled by one leader who was The Kaiser; But when he had gone, the government wanted Germany to be under democracy so that it would let the people of Germany have their own rights and freedom. This Republic suffered from many problems after the war had ended. One of the problems they suffered was Hyperinflation. This was when the government printed off more money after the devastation of the war and the problems from the treaty of Versailles. But instead of it becoming a success, it became more of a failure to the German society and economy. Also, Political fighting and bloodshed occurred during arguments over both political parties the Left and Right. When the Treaty of Versailles was established and signed, it created enormous problems for Germany; Germany was in chaos. ...read more.

This was what was known as the Munich Putsch. Hitler had ex-soldiers with him including SA (Brown shirts) Leader Ernst Rohm working in a Private Army. Hitler was jailed for 5 years but only served 9 months for persuading the Judge and arguing for Germany's rights. Also, the judge that served Hitler that trial was the exact same judge who tried him for disorder 2 years ago, he got released twice. So it seemed that the members in the Right Wing had many friends working in high places. The Party's and Hitler's main phrase was; 'Germany for the Germans'. In 1921, Germany had paid �50 million worth of reperations to France but at the end of 1922, nothing was paid which meant France received nothing from Germany. France was not at all happy and they also had war debts to pay back to USA which made them more frustrated. So early in January 1923, France decided to invade The Ruhr which is on the border between Germany and France. Its steel works and railways are very crucial to Germany and its economy. Belgian and French troops entered the Ruhr (legally under the treaty) and took what they were owed (materials and goods). In a total, approximately 132 Germans lost their lives by French soldiers. The whole of Germany where furious for what had happened; which created more instability for the Weimar Republic. ...read more.

In my opinion, I thought that the main problem for the Weimar Republic was Hyperinflation. This is because of the huge devastation which struck Germany because of Hyperinflation. During 1923 just after the war had ended and the problems of the treaty had begun, Germans were devastated. The government then decided to print more money off hoping to help Germany but it did not. The wages and prices of goods rose when more money was being printed off. For example in Berlin, the cost of bread at the year if 1918 was 0.63 marks and at November of 1923, the cost of bread increased to an enormous value of 201,000,000,000 marks! Also in 1921, the equivalent amount of marks to �1 would be 500 marks and at the year of 1923, �1 then was equivalent to 14,000,000,000,000 marks! Workers needed wheelbarrows to take home their wages and wages had to be paid daily soon instead of weekly. The German Mark became worthless to everyone. Those who had savings lost everything; all money that they had saved up for a new house, goods etc then would not even be able to get them one loaf of bread! It got so bad that children were playing with money by the millions! The pensioners also suffered, Pensioners found that their monthly pension would not even been able to buy a cup of coffee. Overall, Germany suffered a terrible period not being able to purchase simple products such as a loaf of bread! ?? ?? ?? ?? ...read more.