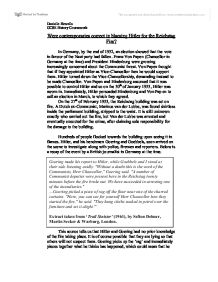 Were contemporaries correct in blaming Hitler for the Reichstag Fire?

Were contemporaries correct in blaming Hitler for the Reichstag Fire? In Germany, by the end of 1932, an election showed that the vote in favour of the Nazi party had fallen. Franz Von Papen (Chancellor in Germany at the time) and President Hindenburg were growing increasingly concerned about the Communist threat. Von Papen thought that if they appointed Hitler as Vice-Chancellor then he would support them. Hitler turned down the Vice-Chancellorship, demanding instead to be made Chancellor. Von Papen and Hindenburg assumed that it was possible to control Hitler and so on the 30th of January 1933, Hitler was sworn in. Immediately, Hitler persuaded Hindenburg and Von Papen to call an election in March, to which they agreed. On the 27th of February 1933, the Reichstag building was set on fire. A Dutch ex-Communist, Marinus van der Lubbe, was found shirtless inside the parliament building, stripped to the waist. It is still unknown exactly who carried out the fire, but Van der Lubbe was arrested and eventually executed for the crime, after claiming sole responsibility for the damage to the building. Hundreds of people flocked towards the building upon seeing it in flames. Hitler, and his henchmen Goering and Goebbels, soon arrived on the scene to investigate along with police, firemen and reporters. ...read more.

The Fire was used as an excuse to eradicate all opposition to Hitler. Goering was Head of the SA at the time, and so he indeed had the manpower to get the job done. Goebbels, as head of propaganda, had to ensure that Hitler won, as he would shoulder a lot of the blame if the Communists won the elections. Bullock also comments on the way in which he thinks the fire was started: by the use of a chemical preparation. The SA had been known to set fire to election posters used by other parties, and so it is possible they would have had the equipment, such as chemicals, to start the Fire. This source is very useful, as it suggests an alternative to the general idea that Hitler had knowledge of the Fire. Van der Lubbe admitted from the beginning that he was solely responsible for the burning of the Reichstag building. He never wavered in his story and was eventually executed for his crime. Below is his police statement. Van der Lubbe was an ex-Communist and a Dutchman, who had not been in the country very long. He had a history of lying and attempting to become famous, such as trying to swim the English Channel but backing out at the last minute, and also of making elaborate claims. ...read more.

As Van der Lubbe did indeed admit full responsibility, some people believe that he carried out the Fire alone. Although his motive is conceivable, it is highly unlikely that he acted alone. It would have been incredibly difficult for Van der Lubbe to get into the building, unless doors to such an important place were left open. In my opinion, I do not believe that the Fire was the fault of the Communists, but neither was it Hitler's doing. I agree with Alan Bullock that Goering and Goebbels, or possibly other leading Nazi members, planned the Fire without the prior knowledge of Hitler. Both men had motives. They wanted to see the Nazi party win the election to avoid blame from Hitler if the Communists gained more seats. I think that they captured Van der Lubbe, informed him of their plan and sent him and the SA into the building, via the underground tunnel. The SA had the keys as they were involved in guarding the Reichstag. Bundles of material were set on fire all over the building. When Hitler was informed of the Fire he was genuinely surprised, and saw a way to eliminate the 'Red Peril'. The Fire achieved its aim - the Nazis won more seats and Hitler eventually became the 'Fuhrer' of Germany. Danielle Howells GCSE History Coursework ...read more.