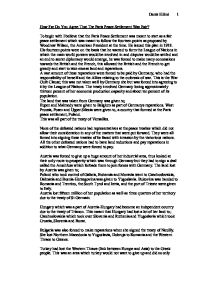 were the paris peace settlements fair

How Far Do You Agree That The Paris Peace Settlement Was Fair? To begin with I believe that the Paris Peace Settlement was meant to start as a fair peace settlement which was meant to follow the fourteen points as proposed by Woodrow Wilson, the American President at the time. He issued this plan in 1918. His fourteen points were on the basis that he wanted to form the League of Nations in which the main world powers would be involved in and disputes would be settled and an end to secret diplomacy would emerge, he was forced to make many concessions towards the British and the French, this allowed the British and the French to get greedy and start to take excess land and reparations. A vast amount of these reparations were forced to be paid by Germany, who had the responsibility of herself and the Allies relating to the outbreak of war. This is the War Guilt Clause; this was not taken well by Germany she but was forced into agreeing to it by the League of Nations. The treaty involved Germany losing approximately thirteen percent of her economic production capacity and about ten percent of its population. ...read more.

She lost Northern Macedonia to Yugoslavia, Dobruja to Romania and the Western Thrace to Greece. Turkey had lost the Western Thrace (link between Europe and Asia) to the Greek people. This was an area which turkey would not want to give up and did so only because they were threatened with force. Another factor was that the majority of the land that Turkey lost was given to either France or Britain as a mandate. This allowed them to control what was going on in those countries and more importantly the oil that was in those countries. This was due to the Treaty of Sevres and Lausanne. The Italians were upset that they did not get the land that they deserved as they felt that they were not getting the respect they deserved from the British and the French. The victorious nations did not reduce the size of their armies. This was unfair as all the defeated powers had their armies reduced. On the other hand the Paris Peace Settlements had sum justice in them. The size of every defeated powers army was reduced which would act as a way to restrict the amount of influence they had military wise. ...read more.

The formation of the League of Nations as proposed by Woodrow Wilson was a good plan. This would enable all the powers of the world to be able to put forward their concerns and requests thus causing the League of Nations to act upon these concerns and requests. The Paris Peace Settlements were balanced on different needs which allow different countries to have different settlements in respect to their situation. In conclusion I disagree that the Paris Peace Settlements were fair as the British and the French allowed themselves to take excess land. This meant that even some of the victorious nations felt they were not getting enough land as they deserve. This is shown as a few years later the victorious nations that believe they should have received more land start to take things into their own hands and take more land. I believe that too much land was taken off the defeated nations and this would cause them to be unsatisfied with the outcome of the settlements. This is shown as a few years after the defeated nations started to take some of their lost land back from the occupying countries. ?? ?? ?? ?? Deniz Hilmi 1 ...read more.