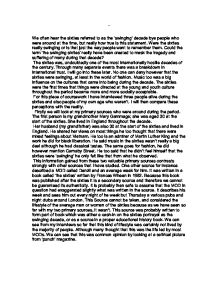 Were the sixties swinging?

Were the sixties swinging? We often hear the sixties referred to as the 'swinging' decade bye people who were around at the time, but really how true is this statement. Were the sixties really swinging or is that just the way people want to remember them. Could the term 'the swinging sixties' really have been created to mask the tragedy and suffering of many during that decade? The sixties was, undoubtedly one of the most internationally hostile decades of the century. Through many separate events there was a breakdown in international trust. I will go into these later. No one can deny however that the sixties were swinging, at least in the world of fashion. Music too was a big influence on the cultures that came into being during the decade. The sixties were the first times that things were directed at the young and youth culture throughout the period became more and more socially acceptable. For this piece of coursework I have interviewed three people alive during the sixties and also people of my own age who weren't. I will then compare these perceptions with the reality. Firstly we will look at my primary sources who were around during the period. ...read more.

This source is useful in conveying the particular event but does not prove that this type of behaviour was endemic of people in the sixties. It was written to interest a tabloid audience. Another source that I looked at which contrasts the three of my interviewees experience is a woman, born in 1948 speaking about the sixties in the 80's. She was saying that Fashion was a very big deal. We do not now why she is giving the source but I would guess that it was for some sort of history book. It is useful in helping us to better understand the fashion of the period, which, despite my interviewees I believe was an important part of life in the sixties. (Full transcripts of these three interviews can be found in the appendix) So we have heard from the people who were there at the time, now we will look at the perceptions of the sixties through the eyes of someone who was not there. Firstly I talked to Alice Fixsen, she is 16. When I asked her what she thought the sixties were she said 'flower power', now according to the primary sources I interviewed flower power didn't play a very important part in most peoples lives, only those who were involved. ...read more.

During the sixties though there was a lot of international mistrust, it was the era of the cold war. Many incidents occurred, such as the Cuban missile crisis, and Vietnam. The memories of these events still leave their mark today. The space race was also a key point for international mistrust there was great sadness during the sixties, the death of president Kennedy and the persecution of black Americans. But also times of joy like when England won the world cup. No one can deny that the 1960's were definitely a time of change. A change in the fashion world, the musical world. The sixties produced some of the best musicians ever to be seen, such as Jimi Hendrix and Eric Clapton. A change in the way black people were treated in America and a change in attitude towards young people all over the world. In these respects it could be called 'the swinging sixties' but in others maybe not. Things such as Vietnam I don't think could be considered 'swinging'. So in conclusion I would say that the sixties was a mixed decade with its ups and down but from what I have read and seen I wouldn't say that everything about it was as swinging as some people make it out to be. Payam Gammage ...read more.