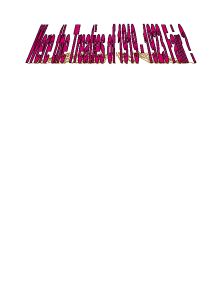 The First World War The First World War broke out in August 1914 it lasted four years. The war was between The Allied Powers, led by France, Russia, the British Empire, and later Italy and the United States, and the Central Powers: Austria-Hungary, the German Empire, Bulgaria and the Ottoman Empire. A Treaty is the contract or agreement between a government or country which ends a war or conflict. It is presented during a war to end all fighting and create peace between the countries or governments involved. A treaty should be fair to ensure that there are no more problems or arguments and that there is finally peace between all individuals involved. The Treaty of Versailles was the peace treaty that officially ended the war. It was between the Allied and Central Powers and the German Empire. ...read more.

The result was said to be a sacrifice that nobody liked. Lloyd George on Left Woodrow Wilson in the Middle and Clemenceau on Right What were the motives of the "Big Three" at Versailles? Out of all the nations that met in Paris to make peace the "Big Three" as mentioned above had the power to make decisions which the others would have to accept. The "Big Three" has many ideas about the peace treaty. It was said President Wilson was "practical and na�ve" and his plans were spoilt by Europe, Prime Minister Clemenceau was "cunning and protective" and was determined for France to have revenge on Germany and Prime Minister Lloyd George who was in the middle of the two. Once the Peace Conference had happened all three men realised that chances would have to be taken. ...read more.

France had been destroyed, he expected Germany to pay for the damage they had created and he wanted to make sure Germany would never invade France again. Clemenceau did not achieve all his aims however he did get a great amount of compensation from Germany. * Woodrow Wilson found it hard to accept other views and once he was involved in the war he wanted a fair agreement that would guarantee peace. In January 1918 he highlighted his 14 Points which he believed would create peace they were ; The Fourteen Points : No Secret Treaties Freedom of the Seas Removal of Economic Barriers Reduction of Armaments Settlement of Colonial Claims Germans to leave Russian Territory and settle all Questions affecting Russia Germans to Leave Belgium French Territory freed and Alsace Lorraine returned to France Italian frontiers were adjusted to take the nationality of the people into account People of the Austro - Hungarian Empire were to be given self determination ...read more.