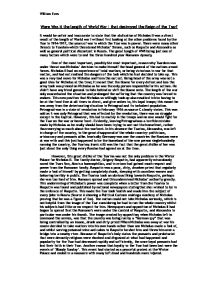 Were Was it the length of World War I that destroyed the Reign of the Tsar?

Were Was it the length of World War I that destroyed the Reign of the Tsar? It would be unfair and inaccurate to state that the abdication of Nicholas II was a direct result of the length of World war I without first looking at the other problems faced by the Tsar in 1914-1917, the years of war in which the Tsar was in power. There were many other threats to Tsardom which threatened Nicholas' throne, such as Rasputin and Alexandra as well as general political discontent in Russia. The great length of WWI being just one of many factors which were to end the three hundred year Romanov dynasty. One of the most important, possibly the most important, reason why Tsardom was under threat was Nicholas' decision to make himself the head general of the nations armed forces. Nicholas II had no experience of total warfare, or being victorious in war for that matter, and had not realised the dangers of the task which he had decided to take up. This was a very bad move for Nicholas and from the out set. Being head of the army was not a good idea for Nicholas at the time; It meant that the blame for every defeat and loss the army took was pinned on Nicholas as he was the only person responsible for his actions. He didn't have any hired general to hide behind or shift the blame onto. ...read more.

This made the Tsar look foolish and made him the subject of every joke in Russia (Source A showing a Political Cartoon making a mockery of Nicholas proving that he was a figure of fun). The nation could not take Nicholas seriously, which is not helpful from the image of the Tsar considering he had to run the whole country whilst his subjects had little or no respect for him. Newspapers and opposition of Nicholas II had begun to spread that the Romano's were under the control of Rasputin, and Alexandra in particular was under his thumb. The image created by opposition, when Nicholas left to command the armies, was that the country was being run by a "German spy" that was being controlled by an insane, drunk and dirty priest! When Nicholas was away at war his cousin decided to take matters into his own hands rather than see Nicholas made a fool of, and whilst serving poisoned wine and cakes to Rasputin he shot him and threw him over a bridge into a nearby river. Because of Rasputin's holy status the peasants and proletariat that were devoutly religious were shocked and disgusted at what had happened and popularity for the Tsar had decreased rapidly and sufficiently, the once loyal peasants had lost their faith in their Tsar. Another reason that loyalty to the Tsar had been lost were the events of 'Bloody Sunday'. ...read more.

This was only adding to the worsening political scene as this left no room for important contrasting ideas from politically minded people which would have helped the country, much unlike the Tsars interest in politics. He would have rather played his sport of conkers. In conclusion, I do not believe that the length of the war was the main cause of the destruction the Romanov dynasty, infact I believe that it was the start of the war that was to blame. In hindsight, its clear to see that Russia had far to many problems to busy itself in a war that could not be won. To fight a war successfully there must be loyal troops and many of them. Nicholas had the numbers but lacked the loyalty and respect needed to win the war. Additionally, it is almost impossible to even imagine winning a war when you are fighting wars on the home and war front. Nicholas was fighting too many failing battles on too many fronts and this led to his downfall. Equally important, I believe, was the loss of popularity and loyalty that Nicholas had from his country in its entirety. Many events contributed to this such as the murder of Rasputin, Bloody Sunday and the three failed Dumas. Overall, the destruction of Tsardom boiled down to loyalty, and more importantly the lack of it. If the Tsar has loyal troops and a loyal population it is, perhaps, a possibility that the Romanov line would have survived until the 21st century. William Eves ...read more.