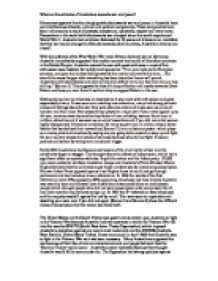 What are the changing attitude of Australians towards war and peace?

What are the attitudes of Australians towards war and peace? It becomes apparent that the changing attitudes towards war and peace in Australia have occurred because of social, cultural and political components. These components have been influenced as a result of protests, acceptance, upheavals, respect and many more. Everywhere in the world attitudes towards war changed when the world experienced World War 1. Australia had only been federated for 13 years and it became an inevitable fact that war would change the attitudes towards other countries, Australian citizens and it itself. With the outbreak of the First World War when Britain declared war on Germany; Australia immediately supported 'the mother country' and so did all the other countries in the British Empire. Australia entered the war with great enthusiasm most of this enthusiasm was mistaken for naivety and ignorance. "Turn your eyes to the European situation, and give the kindest feeling towards the mother country at this time... But should the worst happen after everything has been done that honor will permit, Australians will stand beside out own to help and defend her to our last man and our last shilling." (Source 1) This supports the idea of a deep affection and loyalty towards Great Britain and how our men found it as their duty to support Britain in the war. ...read more.

This is a significant change between the attitudes between the citizens of the First World War and Vietnam. In the First World War we were eager to go to war and were very enthusiastic about it, but in Vietnam we entered because of fear not enthusiasm. This shows how attitudes to war changed in Australia over time and has a high impact on society. During the First World War Australia held two referendums in attempt to make conscription compulsory for males aged 21-34 to serve overseas both of these failed. Conscription was reintroduced in the Second World War and all unmarried males were called up. Conscripts did not have to serve outside of Australia but in 1942 they extended it to the whole South West Pacific. In 1964 conscription was re-introduced and required all males on their 18th birthday to enlist in the 'National Service'. This conscription was only for Australia's own turf and not overseas. But in May 1966 conscripts where chosen by a random birth date lottery and where sent to Vietnam. When the first conscript was killed in action many Australians started to question its involvement in the war and wether these sacrifices where needed. People began to see war as not a political level more of a personal level as the Australia Armies normally consisted of volunteers. ...read more.

this source emphasis's on the fact of the truly degrading attitudes we showed towards the Veterans and how we regretted it. Over time the idea of peace has changed in Australia at first we went into to war to fight for peace but by the time Vietnam War came around it was seen that the fighting in wars were disturbing the peace. During the Vietnam War people protested for what they believed in and caused Australia's home front peaceful nature to be disturbed. Some thought that many of the protesters where hypocritical as they where against our men fighting but some of their protest encouraged violence. War tested Australia as a new nation and helped Australia form a national identity. With the different attitudes that Australia showed during all the wars it is hard to predict how we would act if a war broke out today. Australian ANZACS are known as brave and individualistic whereas most of the time the Vietnam Veterans were known as baby killers. Australia's view towards war and peace were influenced by social, cultural and political components. With the act of heroism the soldiers showed in World War 1 it formed a nation of unity that supported the war and government. The Vietnam War was completely different where not many supported the government and society protested against Australian soldiers fighting in Vietnam War. The attitudes towards war and peace have changed over time in Australia from a nation that went along to a nation that protested for what they believed in. ...read more.