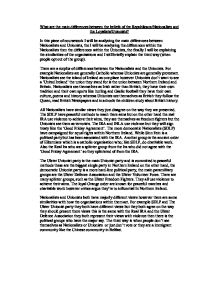 All Nationalists have similar views they just disagree on the way they are presented. The SDLP have peaceful methods to reach there aims but on the other hand the real IRA use violence to achieve their aims, they see themselves as freedom fighters but the Unionists see them as terrorists. The IRA and INLA use violence but they will sign treaty like the 'Good Friday Agreement'. The more democratic Nationalists (SDLP) have campaigned for equal rights within Northern Ireland. While Sinn Fein is a political party but has been associated with the IRA. Another group is the ancient order of Hibernians which is a catholic organisation who; like SDLP, do charitable work. ...read more.

They all use violence to achieve their aims. The loyal Orange order are known for peaceful marches and charitable work however critics argue they're to influential In Northern Ireland. Nationalists and Unionists both have majorly different views however there are some similarities with how the organisations within them act. For example SDLP and The Ulster Unionist party they both have different views but they both agree on the way they should present there views this is the same with the Real IRA and the Ulster Defence Association they both represent their views with violence then there is the political groups who have the major say. The third way is when people don't see themselves as Nationalists or Unionists or just don't vote or they are a immigrant community like the Chinese community in Belfast. ...read more.