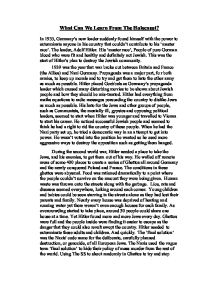 What Can We Learn From The Holocaust?

What Can We Learn From The Holocaust? In 1933, Germany's new leader suddenly found himself with the power to exterminate anyone in his country that couldn't contribute to his 'master race'. The leader, Adolf Hitler. His 'master race', People of pure German blood who were fit and healthy and definitely not Jewish. This was the start of Hitler's plan to destroy the Jewish community. 1939 was the year that war broke out between Britain and France (the Allies) and Nazi Germany. Propaganda was a major part, for both armies, to keep up morale and to try and get them to hate the other army as much as possible. Hitler placed Goebbels as Germany's propaganda leader which caused many disturbing movies to be shown about Jewish people and how they should be mis-treated. Hitler had everything from maths equations to radio messages persuading the country to dislike Jews as much as possible. His hate for the Jews and other groups of people, such as Communists, the mentally ill, gypsies and opposing political leaders, seemed to start when Hitler was younger and travelled to Vienna to start his career. ...read more.

Hitler needed to exterminate these adults and children. And quickly. The 'final solution' was the Nazis' code name for the deliberate, carefully planned destruction, or genocide, of all European Jews. The Nazis used the vague term 'final solution' to hide their policy of mass murder from the rest of the world. Using The SS to shoot randomly in Ghettos to try and stop overcrowding was no longer working. Something quicker and cheaper needed to be invented that could wipe out the Jewish population forever. A meeting was started at Wannsee by Reinhard Heydrich to discuss the matter. In the months following the Wannsee Conference, the Nazi regime continued to carry out their plans for the 'Final Solution.' Jews were deported, transported by trains or trucks to six camps, all located in occupied Poland: Chelmno, Treblinka, Sobibor, Belzec, Auschwitz-Birkenau, and Majdanek-Lublin. The Nazis called these six camps extermination camps. Most of the deportees were immediately murdered in large groups by poisonous gas. ...read more.

Rape and awful beatings were common amongst the Aushwitz victims. Most prisoners at Auschwitz survived only a few weeks or months. Those who were too ill or too weak to work were condemned to death in the gas chambers. Some committed suicide by throwing themselves against the electric wires. Others resembled walking corpses, broken in body and spirit. From these terrible times in history we should learn from them that it should never happen again. It is a constant reminder of what can happen if we don't look out for one another. It teaches us to value our freedom and our democracy. To learn more about our fellow countries so we can help them when they need us. It teaches us how cruel and evil mankind can be. We need to save hundreds of people that are suffering the same fate as the Jews and gypsies did over 50 years ago. If we raise awareness then hopefully we can cause an uprising if anything like it will happen again. People always learn from their mistakes. By Bethan Siddons 9K1 ...read more.