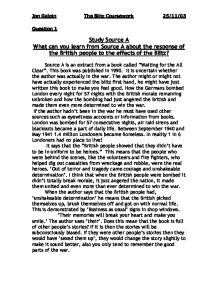 What can you learn from Source A about the response of the British people to the effects of the Blitz?

Question 1 Study Source A What can you learn from Source A about the response of the British people to the effects of the Blitz? Source A is an extract from a book called "Waiting for the All Clear". This book was published in 1990. It is uncertain whether the author was actually in the war. The author might or might not have actually experienced the blitz first hand, he might have just written this book to make you feel good. How the Germans bombed London every night for 57 nights with the British morale remaining unbroken and how the bombing had just angered the British and made them even more determined to win the war. If the author hadn't been in the war he must have used other sources such as eyewitness accounts or information from books. London was bombed for 57 consecutive nights, air raid sirens and blackouts became a part of daily life. Between September 1940 and May 1941 1.4 million Londoners became homeless. In reality 1 in 6 Londoners had no place to live! It says that the "British people showed that they didn't have to be in uniform to be heroes." This means that the people who were behind the scenes, like the volunteers and fire fighters, who helped dig out casualties from wreckage and rubble, were the real heroes. 'Out of terror and tragedy came courage and unshakeable determination'. I think that when the British people were bombed it didn't totally break morale, it just angered the nation, it made them united and even more than ever determined to win the war. When the author says that the British people had, 'unshakeable determination' he means that the British picked themselves up, brush themselves off and got on with normal life. This is demonstrated by 'Business as usual' signs in shop windows. 'Their memories will break your heart and make you smile.' The author uses 'their'. Does this mean that the book is full of other people's stories? ...read more.

Source E is an extract from a secret report to the government by the Ministry Of Information. It is dated 10 September 1940. "When the siren goes, people run madly for shelter. Citizen's Advice Bureau is inundated with mothers and young children hysterical and asking to be removed from the district." The source is trying to say that the British people weren't as laid back about the blitz as Source C was trying to precipitate. They were worried for their survival and concerned for their children. They just wanted to get out of London. "Taxi drivers reported taking group after group to Euston and Paddington." Source F is an extract from Harold Nicolson's diary. It is dated 17th September 1940. Again this Source is saying that the British people were in fear for their lives. "In the east end of London there is much bitterness". The high unemployment of the 1930's wouldn't have helped the situation. "The King and Queen were booed the other day when they visited the destroyed areas." I think that the people of London felt betrayed and lied to. Source G is from a book called 'Don't you know there's A War on?' It was published in 1988. This book is based on the goings on in Coventry. In World War One, Coventry became established as centre for the motor industry. Large numbers of local people were employed in the motor industry. "Planes, tanks and armaments rolled off the assembly lines." During the night raids communities 'trekked' into the countryside to escape the bombs. "Understandably there were widespread fears during the blitz, entire communities migrated into the countryside, or "trekking" as it was called then. So Londoners escaped to Epping Forest during the bombing of the East End." Most of the people who trekked were the same people who turned up for work the next day. Some children, mothers and pregnant women were evacuated from Coventry on 3 and 4 September 1939. ...read more.

"Taxi drivers report taking group after group to Euston and Paddington with belongings." .This is further evidence that the British people weren't as brave as some sources make them out to be. Source F is an extract from Harold Nicolson's diary. It is dated 17th September 1940. Harold Nicolson also knew several members of the Government. He says that there was much bitterness. This could have been because at the end of the 1930's there was high unemployment or because the people of Britain felt betrayed by the Government. "It is said that even the King and Queen were booed the other day." I don't think that he was an actual witness to the King and Queen being booed because he uses 'it is said that'. This means that he must have heard it from someone else. But I do think that the British people felt betrayed. Source G is an extract from a book called 'Don't you know there's a war on?' It was published in 1988. During the war Coventry produced planes, tanks and armaments. I think that this book is out to tell people about the war and what it was like, although I think that it will be subconsciously biased. In conclusion I think that the British people weren't as courageous as the Sources would like us to believe. The only sources that aren't biased or propaganda based are source B, D, E and F. The most compelling evidence is in Source E. I think that it is the most reliable because it is an actual report. "Young children and mothers hysterical and asking to be removed from the district". The word 'hysterical' makes an image of chaos in your mind. This shows what the Blitz was really like. The images in source B and in source D shows how destructive the blitz was, and it also shows how peoples lives had been destroyed. Although most of the sources are propaganda filled and biased it still gives me an insight into what it was like to be in London during the blitz. Jon Galpin The Blitz Coursework 25/11/03 ...read more.